By Isabel Baldwin For Dailymail.Com

Football fans went wild with praise for Deebo Samuel following his performance against the LA Rams on Monday Night Football.

Samuel caught six passes for 115 yards, including a long catch-and-run touchdown, and Talanoa Hufanga scored on an interception return to help the San Francisco 49ers notch a 24-9 victory over the Los Angeles Rams.

It was a dominant victory for the hosts over the reigning Super Bowl Champions but Samuel in particular dazzled as he made one of the most spectacular plays of the season so far. 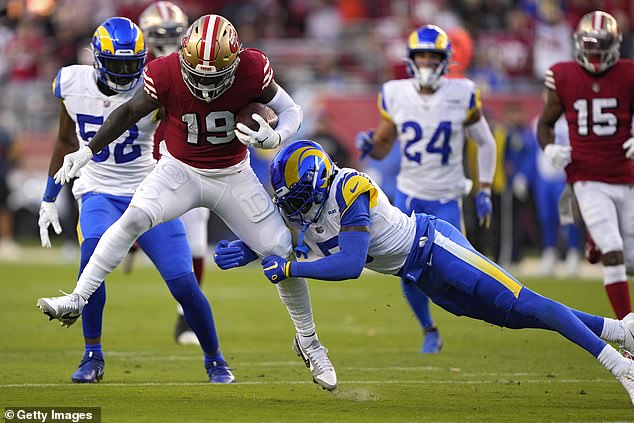 The 49ers were engaged in a tight battle against the Rams late in the second quarter with a narrow 7-6 lead when they just got Samuel on the ball and let him loose.

He reached high and snagged a pass over cornerback Derion Kendrick from quarterback Jimmy Garoppolo.

The Rams defense was then tasked with the task of brining him down in open field but Samuel evaded them time after time.

He first broke a tackle from safety Taylor Rapp, then darted away from a couple other defender as he continued his charge up field, broke another tackle attempt by cornerback Jalen Ramsey and finally got one big block from teammate Brandon Aiyuk near the goal line to score the 57-yard touchdown. 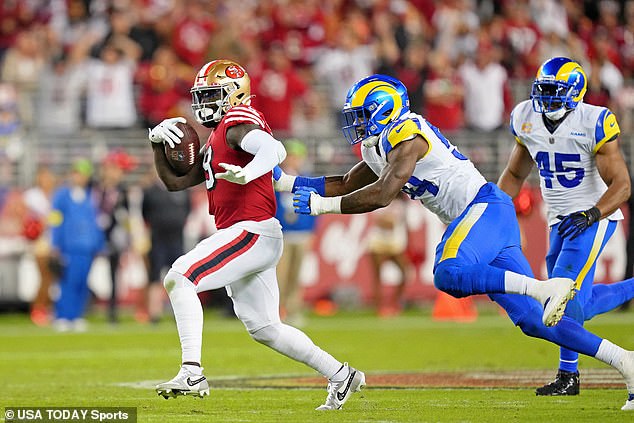 The display had football fans on social media in raptures as they praised the ‘special’ player, with some even describing him as a ‘human cheat code.

Others claimed Samuel was inhuman for the monster play as one supporter wrote: ‘DEEBO SAMUEL ISNT HUMAN.’ Before one hailed the play, saying: ‘What a monster play by Deebo Samuel. Absolute freak energy.’

Others insisted the plays wasn’t only remarkable but demonstrated that Samuel was a ‘special’ player.

Former linebacker Emmanuel Acho wrote: ‘Deebo Samuel is so special, there’s literally NO ONE who plays the game like him. He has hands like a wide receiver but runs like an All Pro running back. He is TRULY 1 of 1!!!’

NBC reporter, Matt Maiocco claimed Samuel ‘slowed down more for speed bumps than he did for that Jalen Ramsey tackle attempt.’

Others insisted that Samuel has embarrassed the Rams defense and Jalen Ramsey in particular.

One fan account posted: ‘The 49ers and Deebo Samuel just put a clown suit on the Los Angeles Rams defense.’

The Athletic’s David Lombardi added: ‘Deebo Samuel just embarrassed Jalen Ramsey It’s hard to explain, but it just felt like the Rams (unsurprisingly) wanted no part of tackling Deebo Samuel on that TD. Ramsey especially. Half-hearted dives at his legs. Samuel has a reputation, especially with LA’

Samuel and Co will face the Carolina Panthers in Week 5 as the wide receiver looks to continue his magical plays Sunday.