The Democrat-led border city of El Paso, Texas, has been quietly working with the Biden administration to spend millions of dollars of federal money busing thousands of migrants to northern sanctuary cities, including New York and Chicago, DailyMail.com can reveal.

While the Republican governors of Texas and Arizona – Greg Abbott and Doug Ducey – have made headlines sending migrants to liberal northern cities to spotlight the crisis on the southern frontier, El Paso is doing much the same, just without the fanfare.

For some, El Paso’s migrant-busing policy showcases how Democrat-led administrations are downplaying the crisis on America’s border, speedily processing thousands of arrivals each day at a warehouse in the desert and packing them on to buses north.

It also opens up President Joe Biden’s administration to accusations of hypocrisy – for criticizing the migrant-busing policies of Abbott and Ducey while cooperating when liberal El Paso does much the same, albeit under a different label.

‘The hypocrisy on display right now by Democrats and coastal elites is a thing to behold,’ said R.J. Hauman, an analyst at the Federation for American Immigration Reform (FAIR), a policy group.

‘Transporting illegal aliens into American communities is either perfectly fine or inhumane. It just depends who sends them and where they go.’ 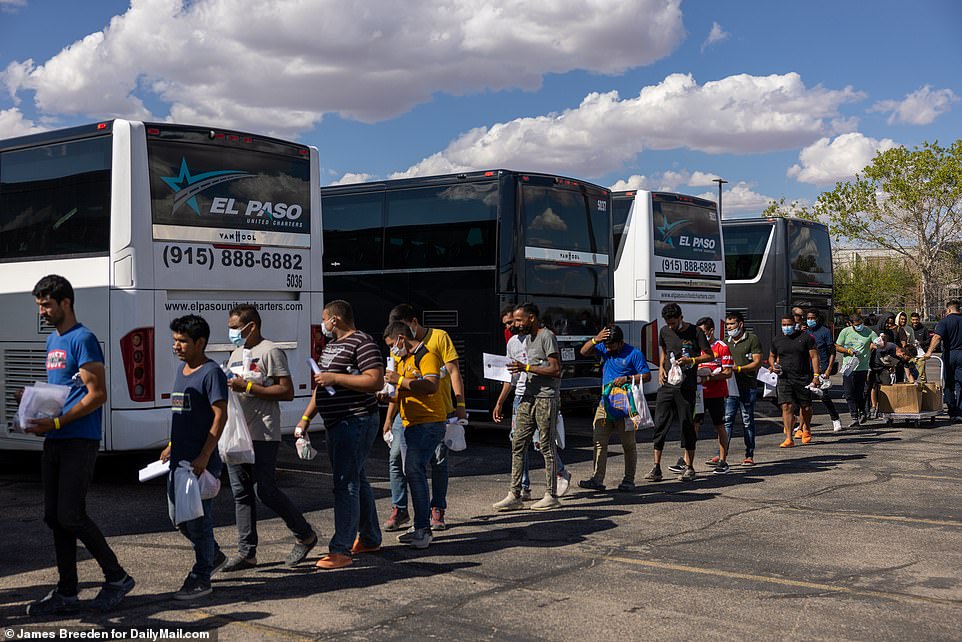 El Paso helps more than 500 migrants every day board buses to New York and Chicago and assists with travel plans elsewhere across the U.S. 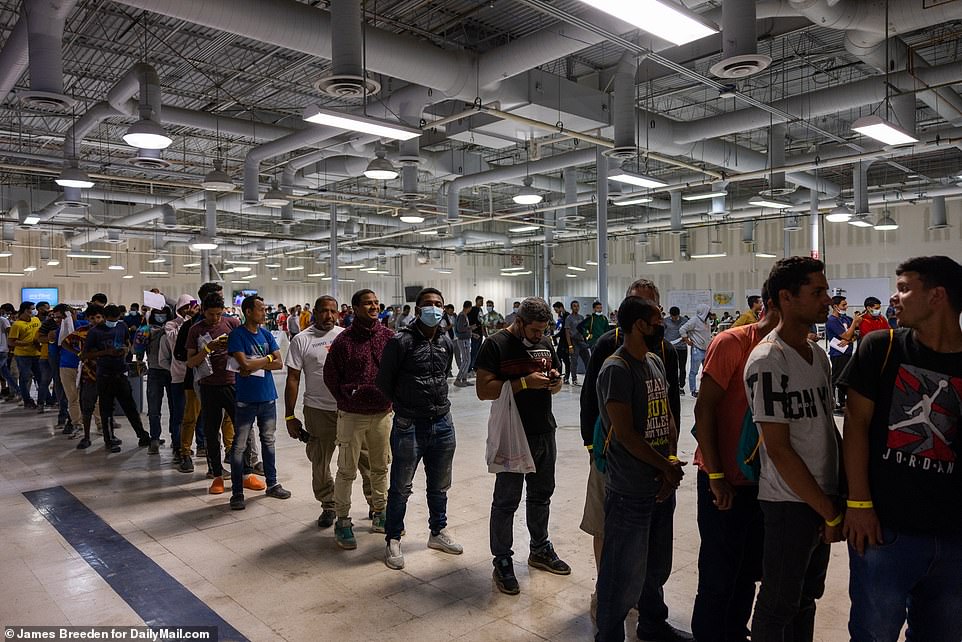 The city moved its migrant problem to a processing facility on the edge of town. Previously, a surge of new arrivals overwhelmed the downtown area 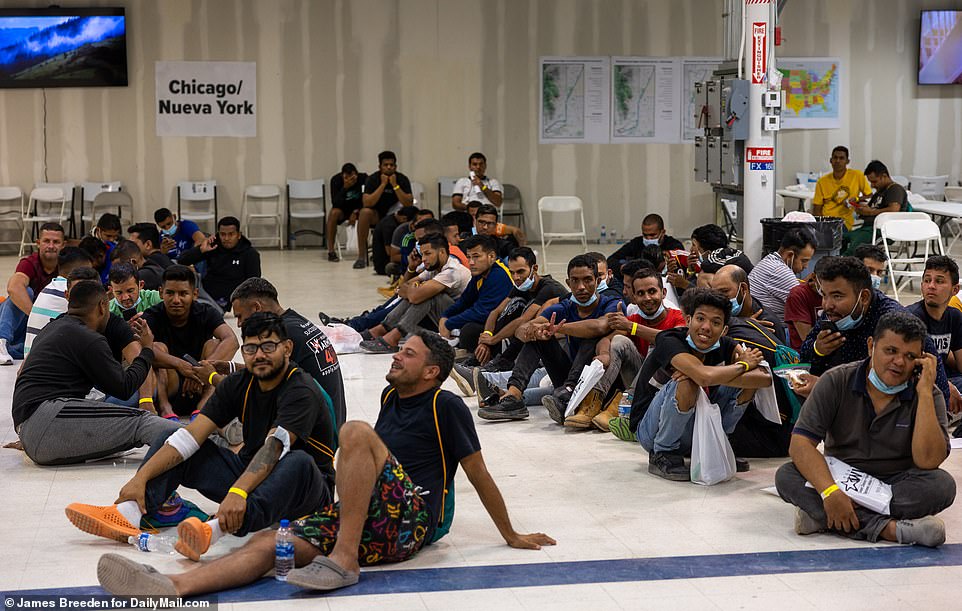 The frontier city is battling a surge of migrants, with some 1,500 crossing daily, many fleeing flawed leftist regimes in Venezuela, Cuba and Nicaragua, overwhelming federal processing hubs and spawning chaotic scenes of migrants sleeping rough on downtown sidewalks.

City and county officials have responded by spending millions of dollars opening ‘welcome centers’ to get migrants out of El Paso, after they’ve been lawfully released by Customs and Border Protection (CBP), often with far-off court appearance dates scheduled.

El Paso city spends $250,000-$300,000 daily on feeding and arranging travel for migrants and lodging them in hotels or shelters, and last month opened a transit center in an industrial zone on the city’s northeastern desert edge.

There, migrants with means can book their own flights or buses for onward travel. Cash-strapped newcomers get free rides aboard charters. More than 5,000 arrivals have been sent north aboard more than 115 such buses since August 23. 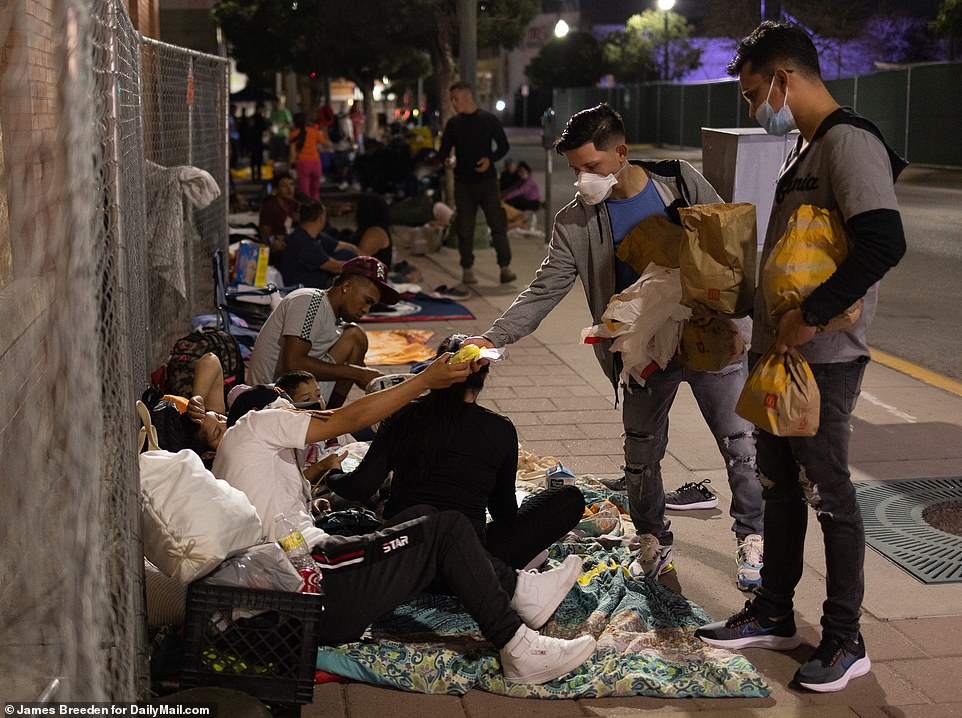 Downtown El Paso has in recent weeks witnessed chaotic scenes of migrants sleeping on the streets, after the surge of new arrivals overwhelmed the area’s federal-run processing facilities 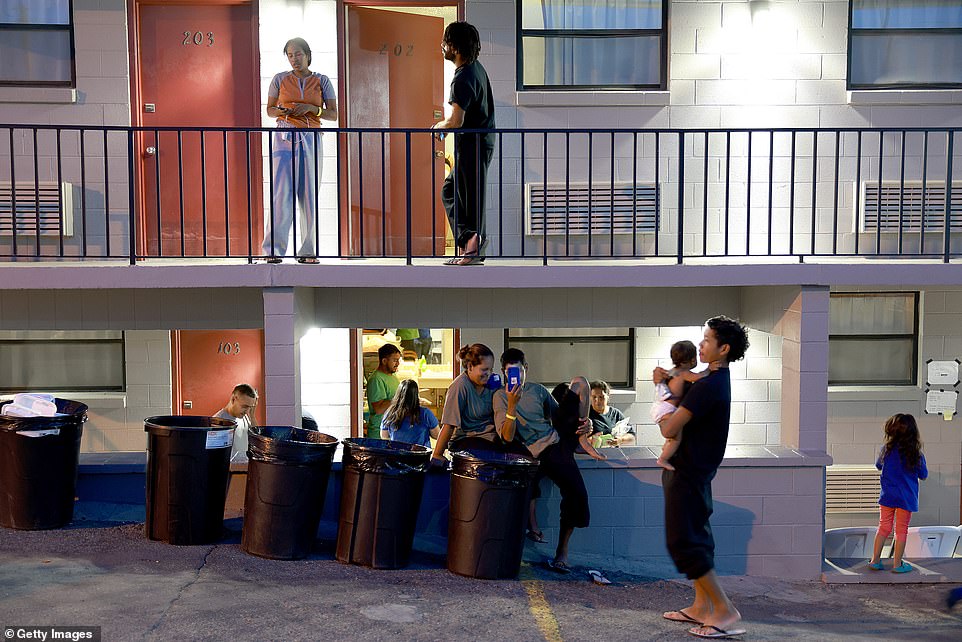 At a recent visit to the center, migrants from Venezuela and Cuba told DailyMail.com of grueling overland journeys to reach America and of plans to meet friends and relatives across the U.S., find work and send money to needy relatives back home.

The city council recently voted to allocate $4 million to charter more buses over the coming months – an eye-watering sum for a relatively poor city – on the understanding that the Federal Emergency Management Agency (FEMA) would reimburse the money.

Does the Biden administration have a grip on immigration?

Mario D’Agostino, El Paso’s deputy city manager, told DailyMail.com that busing thousands of arrivals was a ‘humanitarian effort in getting them to the location where they want to be’.

‘They’re on a journey to the United States, whether it’s New York City or Chicago, they have told us El Paso is just the crossing point,’ he added.

The policy came about through coordination between El Paso, its Democratic representative in Congress, Veronica Escobar, the White House and FEMA, which will at least in part reimburse the city, D’Agostino said.

The White House and Escobar’s office did not answer DailyMail.com’s interview requests.

El Paso officials distance themselves from the migrant-moving schemes of Abbott, Ducey and Florida Governor Ron DeSantis, who last month sent a planeload of some 50 Venezuelans to Martha’s Vineyard, an upscale liberal island retreat in Massachusetts. 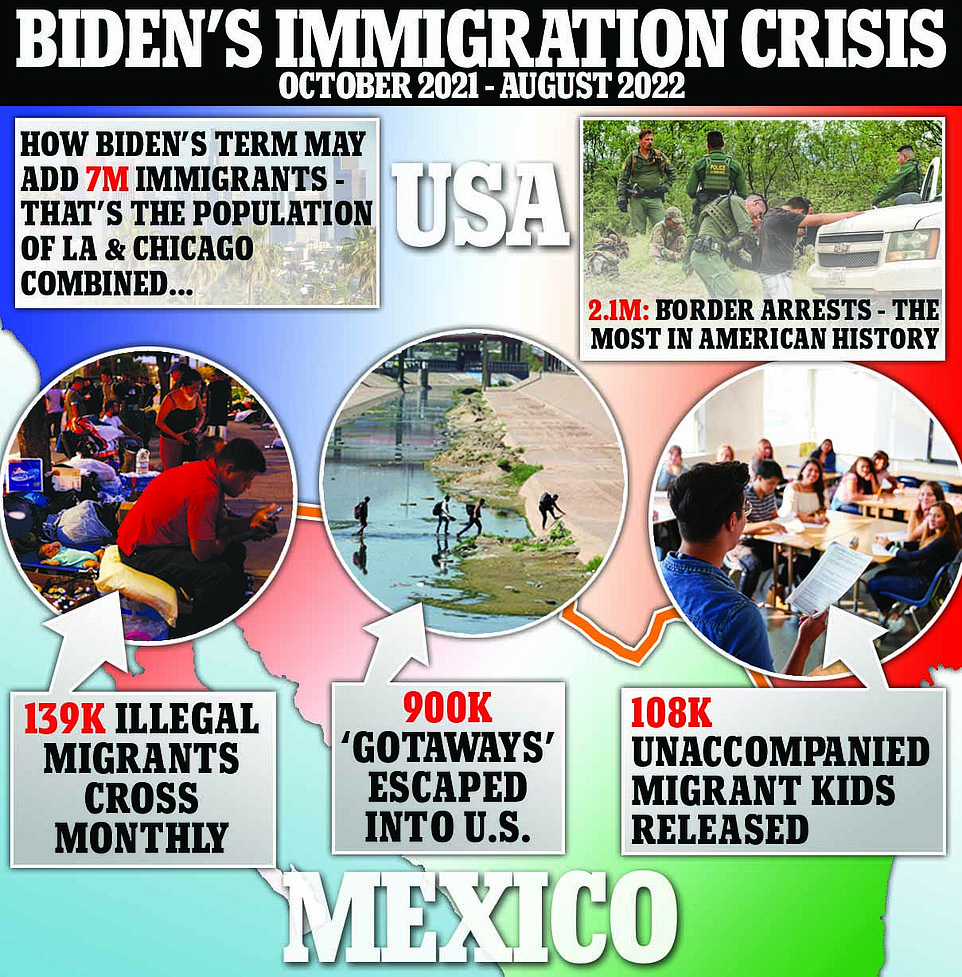 Joe Biden’s presidency could easily end with seven million or more new migrants in America – a population larger than the size of Los Angeles and Chicago combined. 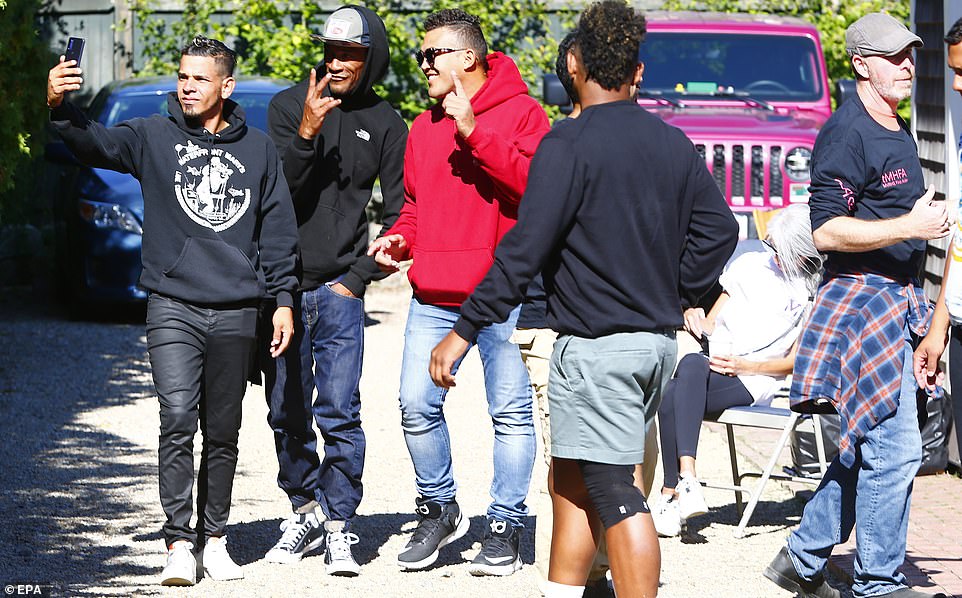 Florida Governor Ron DeSantis sent a planeload of some 50 Venezuelans to Martha’s Vineyard, an upscale liberal island retreat in Massachusetts

El Paso’s buses, they say, operate in coordination with officials in New York and Chicago – who get advance notice of arrivals and the names of the migrant passengers aboard. Charity teams from Grannies Respond are ready to assist them on arrival, they add.

Still, many of the destination sanctuary cities say they have been overrun by the new arrivals. New York Mayor Eric Adams is even considering housing them on cruise ships because the city’s shelters have been overwhelmed. 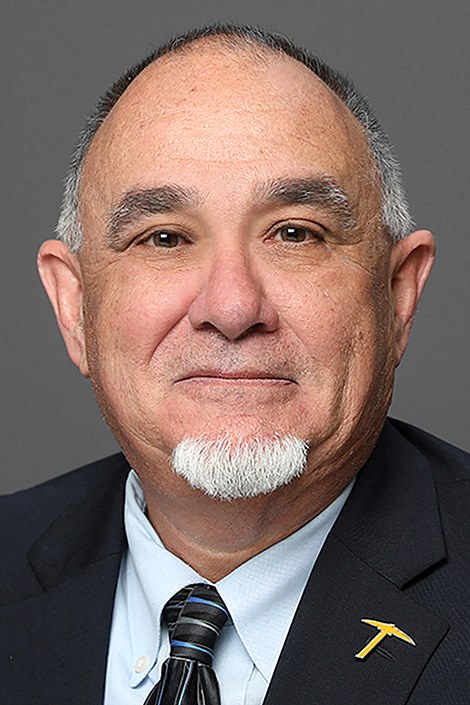 Victor Manjarrez, a former CBP chief for the region who now heads a department at The University of Texas at El Paso, says Democrats and Republicans are staging ‘political theater’

El Paso’s busing policy is not wholly popular. Victor Manjarrez, a former CBP chief for the region who now heads a department at The University of Texas at El Paso, says Democrats and Republicans were playing a game of ‘political theater’.

By busing migrants north, El Paso officials were ‘doing the same thing’ as governors Abbott and Ducey, only ‘it’s just not getting the same type of attention,’ Manjarrez told DailyMail.com.

Others say the migrant surge has overstretched a city of nearly 700,000 and that while FEMA has reimbursed some of the costs, there is no guarantee the agency will continue to pay. City officials warn that services could be cut.

Last month, the migrant influx overwhelmed CBP, which had to release newcomers from its facilities onto El Paso’s streets. Dozens slept on sidewalks near the bus station downtown.

Some welcomed them; others complained of a urine smell and aggressive begging.

Moving migrants to the edge of town was ‘out of sight, out of mind’, said city representative Claudia Rodriguez, who voted against upping the bus budget. She accused the city of ‘throwing more and more money’ away.

The full cost on El Paso taxpayers was not yet clear, as local police and firefighters have been redeployed to staff the welcome center, clocking up overtime pay that is further straining a tight budget, she added. 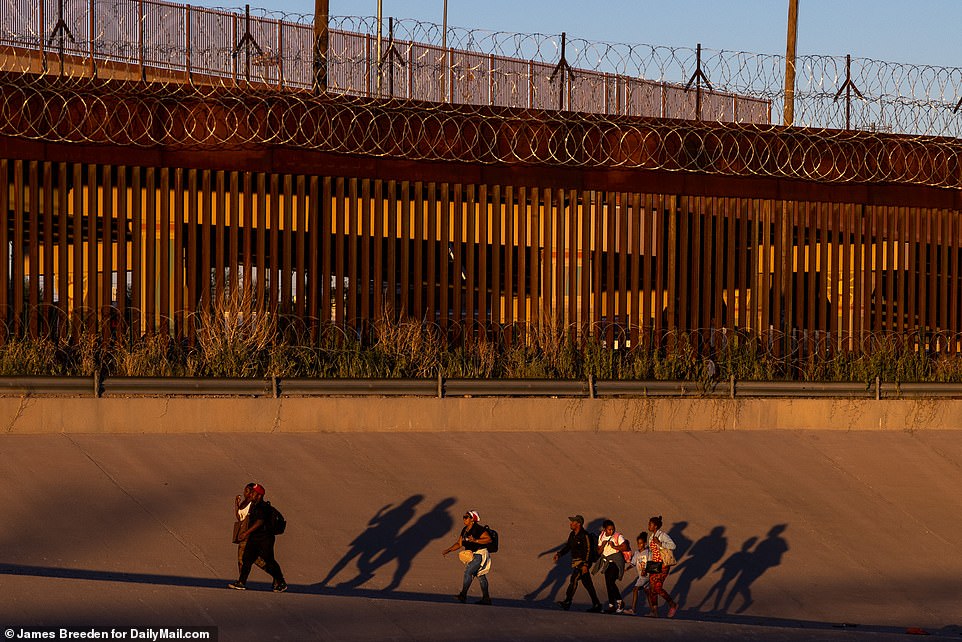 Migrants cross the Rio Grande river from Ciudad Juarez in Mexico to El Paso, in the U.S., before turning themselves in to waiting border patrol agents 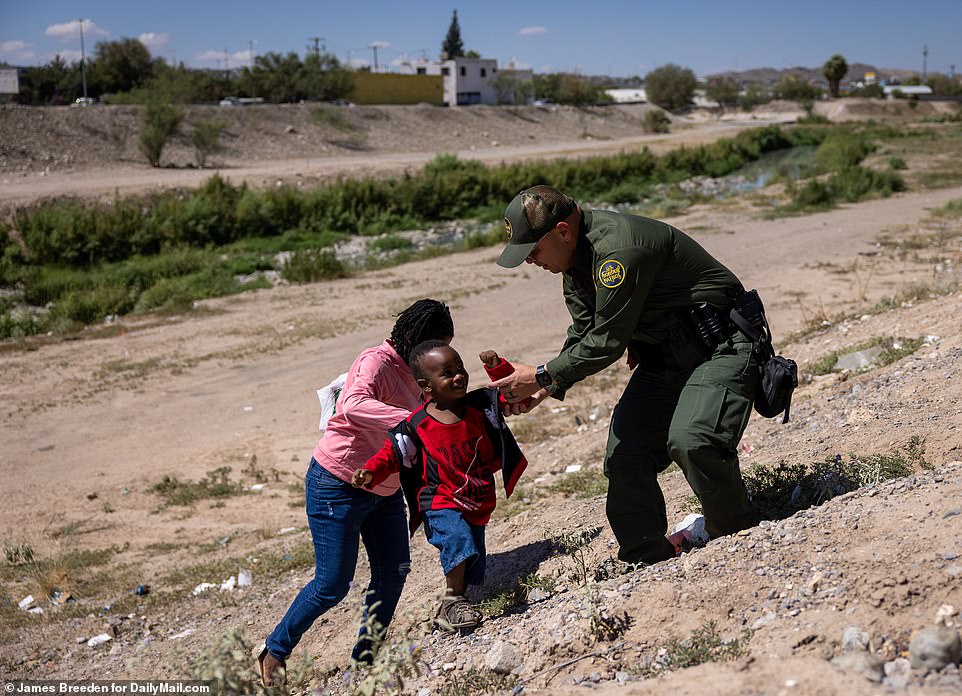 A Haitian family crosses the Rio Grande river from Ciudad Juarez in Mexico to El Paso, in the U.S., assisted by an official from Customs and Border Protection 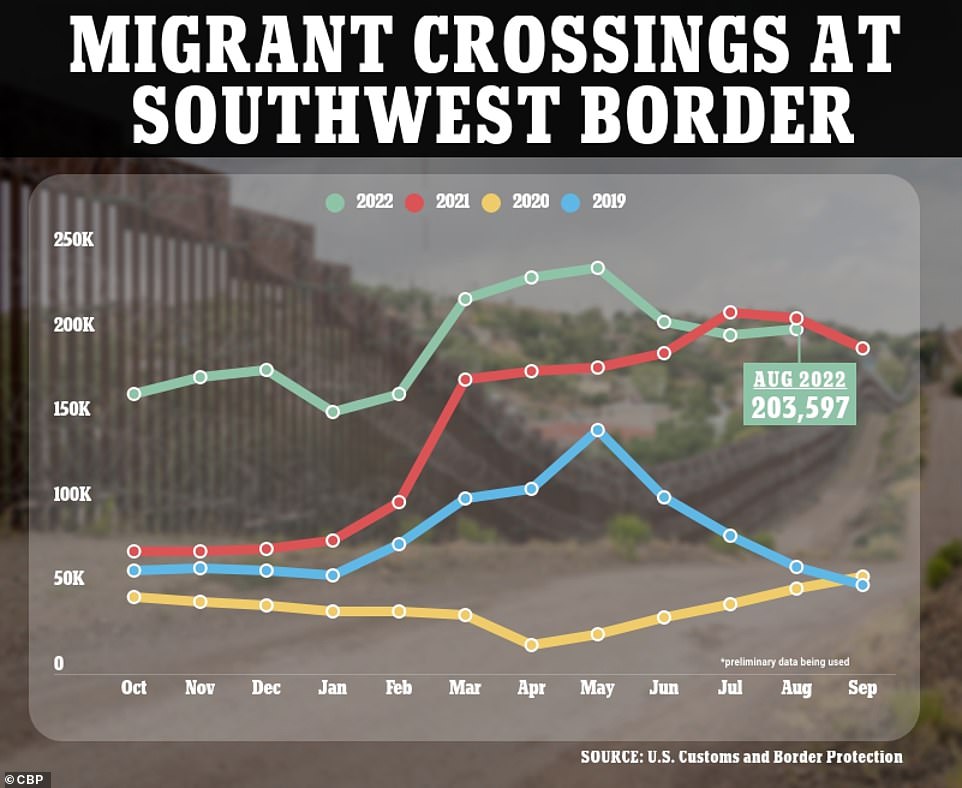 Likewise, Guadalupe Giner, who is running to replace El Paso’s Democratic county judge in November’s elections, said residents were being forced to accommodate and pay for some troublemakers among the many decent migrants who had entered the U.S. illegally.

‘They’re using our dollars for a federal failure, which is failing to secure our border,’ Giner said.

‘This is not just an El Paso or a Texas problem. This is a national problem.’

U.S. border guards are grappling with a surge of migrants crossing from Mexico. Authorities stopped migrants 2.15 million times from October through August, the first time the figure was above 2 million during the government’s fiscal year.

The El Paso area registered 157,921 encounters in August, a 2.2 percent rise on July, with fewer Mexicans and Central Americans and a massive uptick in Venezuelans and Cubans, who stand a better chance of admission than some other nationalities.

The surge in unauthorized border crossings has come as the Biden administration seeks to unravel some of the tough frontier restrictions imposed by former President Donald Trump.

Republicans including Abbott, DeSantis and Ducey accuse the Biden administration of failing to secure the border; the White House counters by saying those governors are using migrants as a ‘political tool’ in their northbound bus and plane deliveries.

Texas has committed billions of dollars to Abbott’s ‘Operation Lone Star,’ which includes boosted border security and bus trips. Since April, state authorities have bused 2,200 migrants to New York, 300 to Chicago and 8,000 to Washington – including one drop-off at Vice President Kamala Harris’s home in the capital.

Arizona has bused more than 1,800 to Washington since May.

Hauman, the immigration expert, likens El Paso’s hush-hush buses to the Biden administration’s charter flights resettling migrants across the U.S., carried out ‘under the cover of darkness for over a year’. 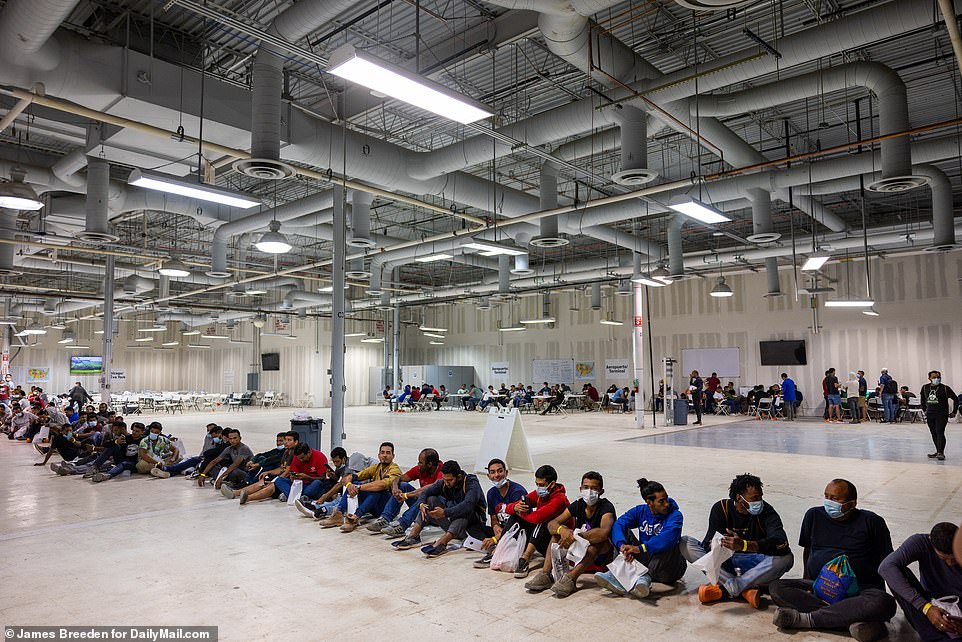 Migrants await their buses north at El Paso’s so called ‘welcome center’. Some city officials fear the city is spending too much money and will not be fully reimbursed by federal emergency relief funds 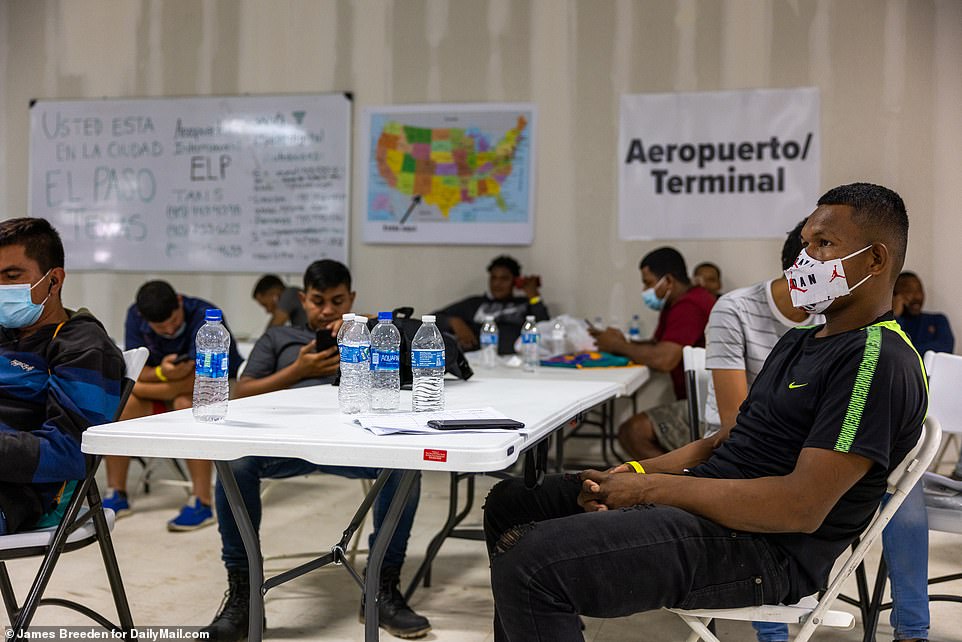 Much like Abbott and Ducey, Democrat-run El Paso concluded that ‘Biden’s complete dismantling of immigration enforcement and border security’ had left administrations on the border with little choice but to shunt new arrivals north, he added.

A CBS/YouGov survey recently found that 51 percent of registered voters approve of sending illegal immigrants to Democratic cities, compared to 49 percent who disapprove. Many said it was an effective way of spotlighting the issue of illegal immigration.

After reaching their destinations, migrants may remain in the country for months or even years while they pursue asylum claims or fight deportation cases in court; during which time they are permitted to work.

Migrants are not the only people leaving El Paso. George Brenzovich last year sold up his frontier house along the Rio Grande in Fort Hancock, 55 miles to the southeast, relocating to eastern Texas.

He bemoaned two decades of watching growing numbers of migrants traipse across his land.

‘We could just go outside and listen to the gunfire across the border and watch the border patrol running around, chasing folks in their helicopters day and night. Didn’t need to watch much television.’ 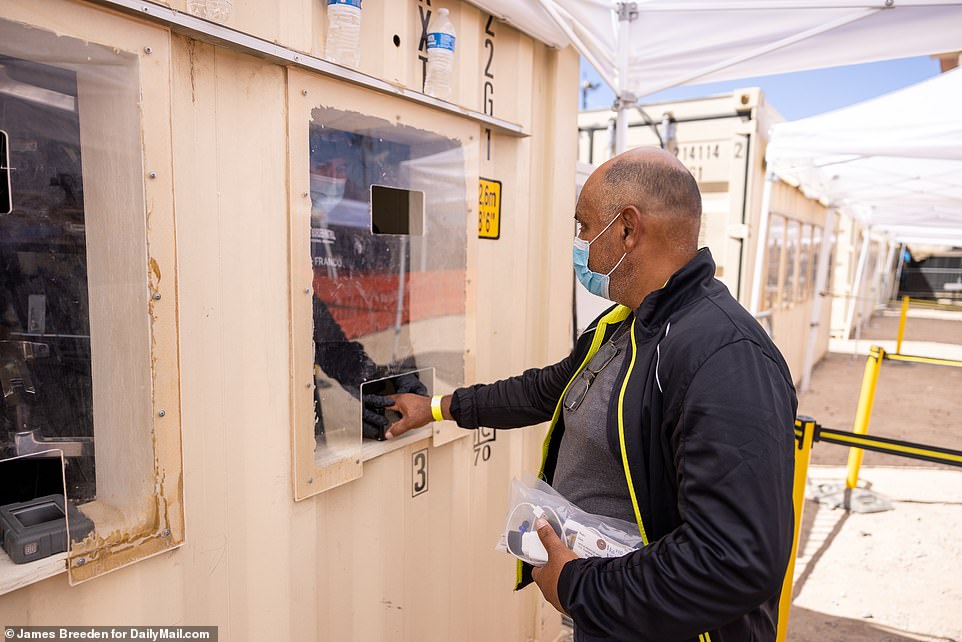 After crossing into the U.S. illegally, a Customs and Border Protection (CBP) stationed near the river takes fingerprint scans of the arriving migrants 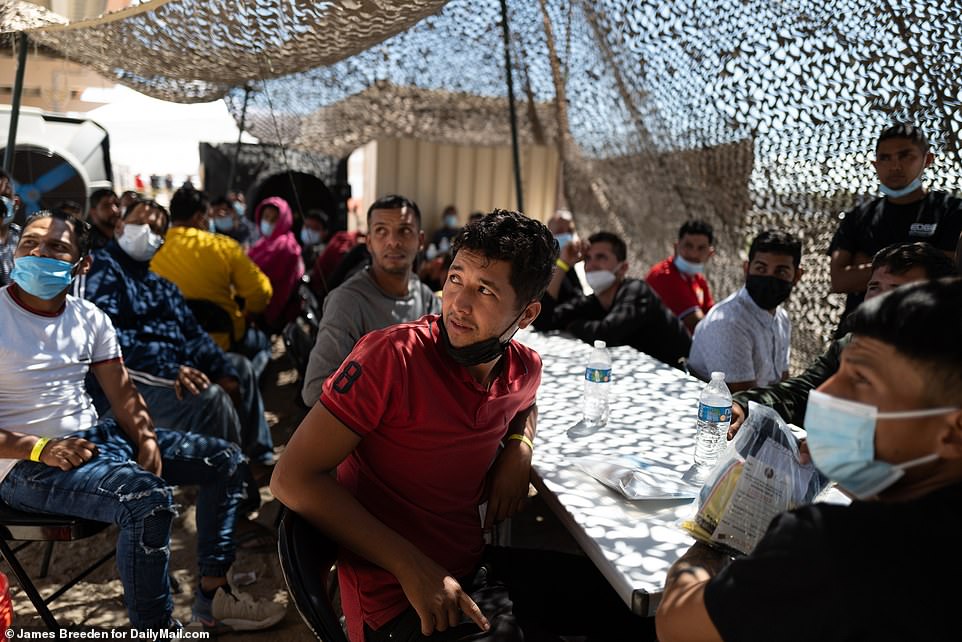 Migrants in the custody of Customs and Border Protection (CBP) being processed along the frontier with Mexico, where many make claims for asylum