The man who claims he created Qantas’ iconic ‘Spirit of Australia’ slogan has angrily demanded they remove the title saying it is a ‘tragically inappropriate’ to describe the under fire airline.

Phillip Adams, a columnist for The Weekend Australian magazine and ABC Radio National host, says he convinced former chairman Jim Leslie to adopt the tagline in the 1980s and Peter Allen to allow his iconic tune I Still Call Australia Home to become Qantas’ anthem.

‘Alan Joyce. You force to repeat myself. I’m the author of ‘the Spirit of Australia’. Then deserved, now tragically inappropriate,’ he wrote to Twitter.

‘My slogan is hereby vetoed. Please remove it from all fuselages, tickets and advertising.’ 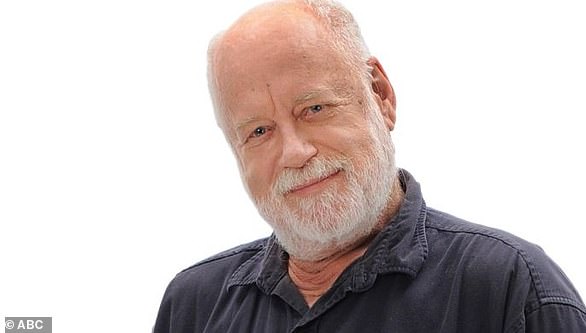 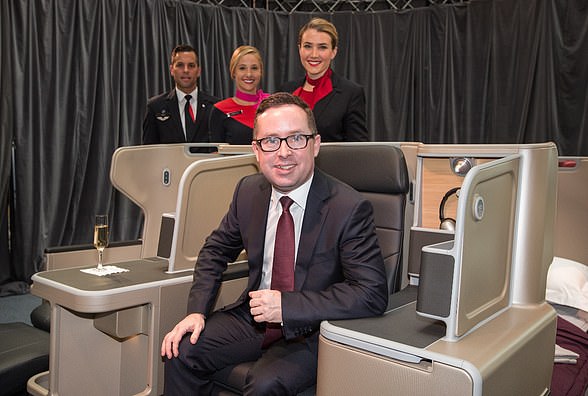 ‘Alan Joyce. You force to repeat myself. I’m the author of ‘the Spirit of Australia’. Then deserved, now tragically inappropriate,’ Mr Adams wrote to Twitter

In a statement to Daily Mail Australia, Qantas said: ‘The Spirit of Australia tagline is an iconic part of the Qantas brand and isn’t going anywhere.’

It’s the latest run-in between Mr Adams and Qantas after the airline stripped the columnist of his membership to its Chairman’s Lounge – described as the ‘most exclusive club in Australia’.

Those lucky enough to step inside can expect to rub shoulders with the Prime Minister, A-list celebrities and influential businessmen.

The Chairman’s Lounge is deemed such a privilege that Mr Adams was furious that Qantas refused to renew his membership in 2019.

‘I was hardly cluttering up the facility and I was really quite surprised because I do have a large media footprint,’ a disappointed Mr Adams told The Australian. 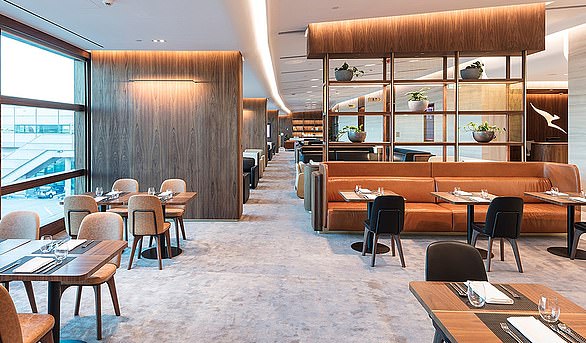 Members invited to be a part of the exclusive club are given a matte black card after being personally signed off by Qantas bosses.

Each membership lasts for two years and invitations have nothing to do with frequent flyer points or status.

‘Membership is very sought after and it’s a great asset for Qantas to utilise for our commercial endeavours’ Qantas CEO Alan Joyce said of the club in the past.

Mr Adams said he has ‘no idea’ why he was kicked out of the exclusive club, admitting he had any number of secrets to tell about the goings on behind the secretive doors. ‘So many CL stories I could kiss and tell but won’t (on being admitted you have to sign the Official Secrets Act). And now I’m out on my arse. No idea why,’ he wrote in The Australian.

‘I was given the bad news a few days after they expelled Fraser Anning, so it may have been a left-wing right-wing thing, to keep the books and Boeings balanced.

‘There are other potential reasons, though. Too old? Then no need to expel me – let nature take its course. Too infrequent a flyer? Well, I haven’t flown much lately, thanks to ill-health and bad weather.

‘A long lifetime of loyalty rewarded with disloyalty. Is this the spirit of Australia? With a breaking, pacemaker’d heart… I can no longer call Qantas home.’

The airline has revealed last week it will reduce the number of domestic flights by five per cent for July, August and September – adding to the 10 per cent announced in May.

Qantas Domestic reportedly made 4,500 flights per week in the lead-up to the Covid pandemic, meaning a 15 per cent cutback would lead to 675 fewer flights.

It was also forced to apologise to more than 300 passengers recently who were left stranded at Dallas/Forth Worth Airport for 24 hours – with many forced to sleep on the floor. Members of the federal government are known to also be gifted membership to the exclusive lounge (pictured, lounge in Brisbane)

Customers said there was no Qantas presence at the airport, and the airline were unreachable despite numerous attempts from Aussies waiting to fly home and American staff.

Disgruntled workers recently revealed to Daily Mail Australia last month what it’s really like to work for the Flying Kangaroo, levelling extraordinary allegations against the airline amid a bitter court battle that could result in a multi-million dollar payout.

The Transport Workers Union took Qantas to court in late 2020, when it was ruled the airline illegally sacked nearly 2,000 baggage handlers, cleaners and ground staff before outsourcing their jobs to foreign-owned providers, including Swissport.

The trickle-down effect has seen jaded customers, including Frequent Flyer members, saying they are looking to other airlines when flying.

The Trade Workers’ Union says Qantas’s issues start at the top, and point to Alan Joyce’s mismanagement of the airline over the pandemic and its thousands of laid-off staff. 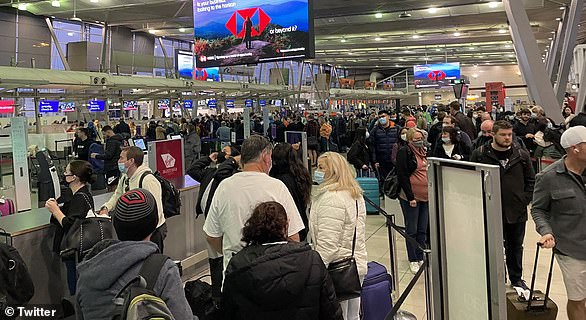 Customers say there is a complete lack of support staff at airports which is leading to massive delays, missed flights and lost luggage

‘Blaming passengers for delays over the Easter long weekend while refusing to reinstate the highly trained workers it illegally sacked despite there being obvious demand for experienced workers in the industry shows how out-of-touch the Joyce-led management team has become.’

The airline, which argued the outsourcing was a necessary financial measure during the Covid pandemic, appealed the ruling and lost – but has since taken the case to the High Court in a last-ditch bid to avoid paying a mammoth compensation bill.

Cost-cutting was magnified by the pandemic, with 15,000 workers laid off without pay or forced to take leave in mid-2020, while another 2,500 were stood down in August, 2021 – despite Qantas receiving $2billion in government assistance.

Qantas maintain the moves were necessary due to losing $22billion in revenue and losses in excess of $5billion over the pandemic. It also said the government handouts in part went towards continuing repatriation and freight flights during the pandemic.