British gymnast Becky Downie says she feels ‘vindicated’ after the shocking culture of physical and emotional abuse within the sport was laid bare in a damning report on Thursday.

The Whyte Review has exposed incidents of children as young as seven being sat on, spat at and slapped by coaches, gaslighted, fat shamed and refused access to food and the toilet, leading to eating disorders and mental health issues.

Downie, a medallist for Team GB at both the World and European championships, released a statement on Twitter in which she said that her and other people who have talked about abuse within the sport ‘have finally been heard’.

She said:  ‘I didn’t want to respond until I’d had adequate time to read and properly digest everything in yesterday’s announcement.

’24 hours later my overwhelming feeling is: we’ve finally been heard.

‘It feels like a vindication for myself and so many who have known for so long of the serious cultural problems within the sport. A sport I love more than anything. 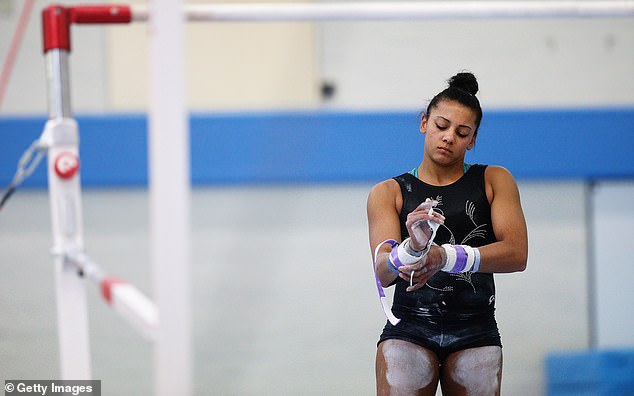 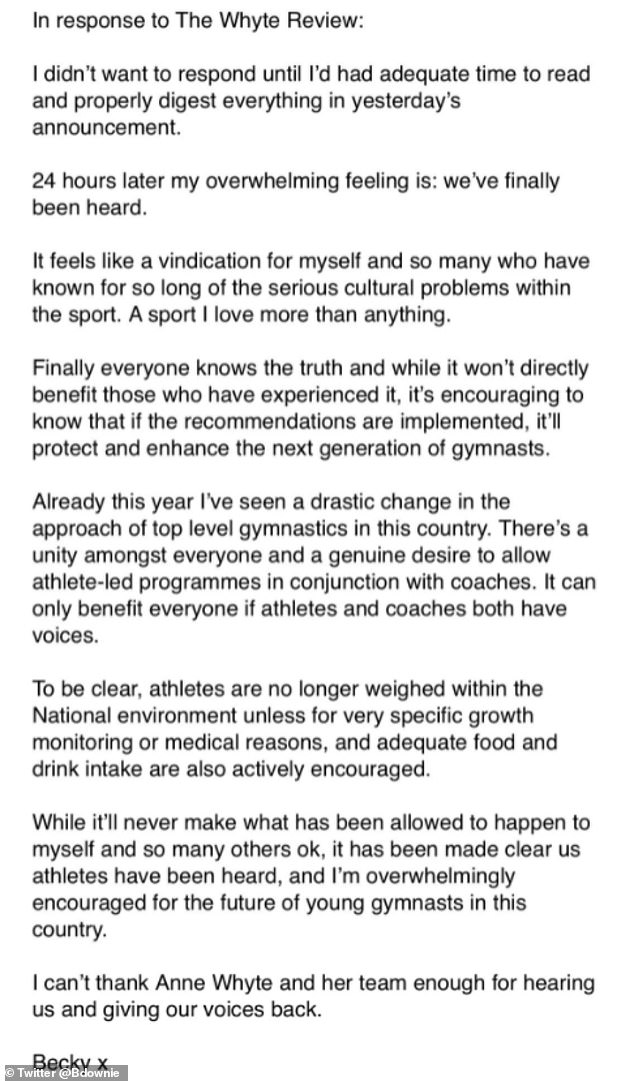 ‘Finally everyone knows the truth and while it won’t directly benefit those who have experienced it, it’s encouraging to know that if the recommendations are implemented, it’ll protect and enhance the next generation of athletes.’

Anne Whyte QC’s landmark 306-page report also said the ‘cash for medals’ culture within British Olympic sport may have contributed to the gymnastics scandal and called for an overhaul of the system.

UK Sport and Sport England – who co-commissioned the £3million independent investigation in 2020 – described the gymnasts’ testimonies as ‘harrowing and distressing’ and apologised.

However, they have refused to strip British Gymnastics of public funding for now, despite the report accusing the governing body of a ‘collective failure’ and prioritising performance over athlete welfare. 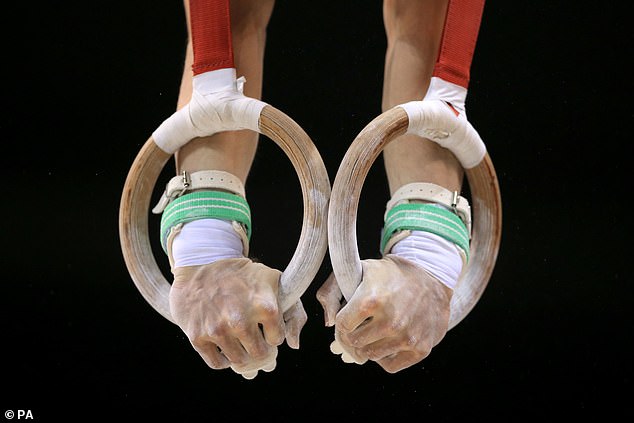 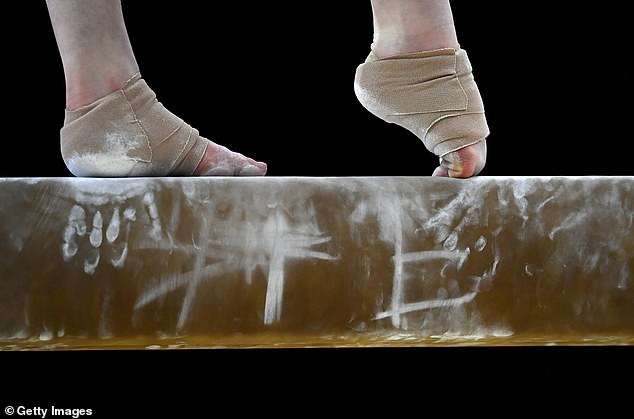 The Whyte Review has exposed incidents of children as young as seven being sat on, spat at and slapped by coaches, gaslighted, fat shamed and refused access to food and the toilet

New British Gymnastics chief executive Sarah Powell issued her own apology but she could not confirm whether any of the anonymous coaches accused of abuse in the report still worked for her organisation.

The Whyte Review received evidence from more than 400 people, with 40 per cent describing physical abuse and 50 per cent reporting emotional abuse. Allegations of sexual abuse also featured in 30 submissions.

Downie in her statement said that she has seen a ‘drastic change’ in the approach of top level gymnastics, and that she is ‘encouraged’ for the future of young gymnasts in the country.

She said: ‘Already this year I’ve seen a drastic change in the approach of top level gymnastics in this country. There’s a unity amongst everyone and a genuine desire to allow athlete-led programmes in conjunction with coaches.

‘It can only benefit everyone if athletes and coaches both have voices.

‘To be clear, athletes are no longer weighed within the national environment unless for very specific growth monitoring or medical reasons, and adequate food and drink intake are also actively encouraged.

‘While it’ll never make what has been allowed to happen to myself and so many others ok, it has been made clear us athletes have been heard, and I’m overwhelmingly encouraged for the future of young gymnasts in this country. 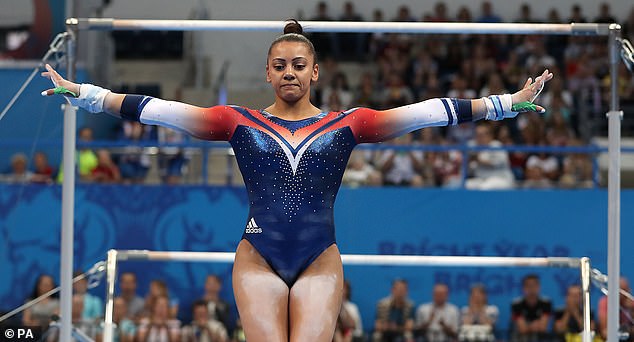 ‘I can’t thank Anne Whyte and her team enough for hearing us and giving our voices back.’

But she said: ‘We welcome today’s report and accept and endorse all of its recommendations. 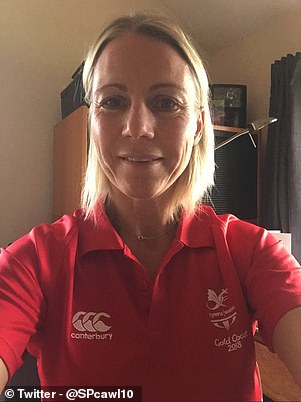 ‘The gymnasts’ experiences shared in this review are harrowing and distressing to read. We want to publicly acknowledge and thank all those courageous in coming forward.

‘As the report found, the assurance systems in place did not identify, until relatively recently, long-standing cultural problems in gymnastics. For this we are sorry.’

British Gymnastics chief executive Powell said: ‘To read the recollection of these individuals who’ve had such a poor experience of the sport, which has clearly affected them and they’ve suffered because of it, is not acceptable. It’s emotional for me, I’m a mum and sport is not supposed to do this.

‘I had to speak to gymnasts this morning – and it was hard. I looked them in the eye and said sorry.’ 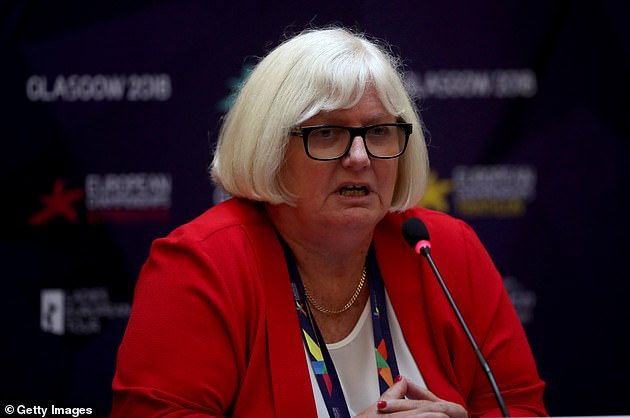 Powell was appointed at British Gymnastics last June, replacing Jane Allen (pic), who resigned in 2020 with a severance package despite being CEO for 10 years – the time of the scandal

Powell was appointed at British Gymnastics last June, replacing Jane Allen, who controversially resigned in 2020 with a severance package despite being chief executive for 10 years – the time of the scandal.

‘All I can hope I think this is a watershed movement not just for gymnastics but safeguarding in all sports,’ added Powell.

In a statement, Allen said: ‘It’s been very hard to hear the painful experiences shared by people in a sport that I’ve been dedicated to for many years.

‘I’m deeply sorry I didn’t do more for everyone — especially the athletes — to feel supported, able to speak up and heard. This was under my leadership and it should have been different.’