North Korea has threatened to resume its nuclear and long-range missile tests as it prepares for ‘confrontation’ with the US.

Kim Jong Un has not tested inter-continental ballistic missiles or nukes since 2017 after putting launches on hold, but fears are growing the tests will restart after the US crossed a ‘danger line’.

Pyongyang has been carrying out a number of tests on other weapons including tactical guided missiles this week, as Kim strives to strengthen his military in response to ‘hostile moves’ from the US.

When Washington imposed fresh sanctions last week, North Korea said it was a ‘provocation’ and ramped up conventional weapons tests, vowing a ‘stronger and certain’ response to efforts to rein it in.

‘The hostile policy and military threat by the US have reached a danger line that can not be overlooked any more,’ a report on a meeting of the country’s Politburo in state media KCNA said Thursday. 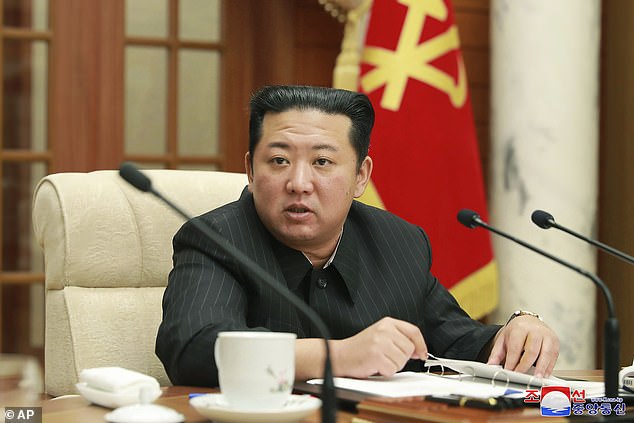 The North’s top officials ‘unanimously recognized that we should make more thorough preparation for a long-term confrontation with the US imperialists,’ KCNA reported.

This includes examining restarting all temporarily-suspended activities, the report added.

North Korea conducted its sixth and last test of a nuclear explosive device in September 2017 and its last launch of an ICBM was in November that year.

Experts say Kim is reviving Pyongyang’s old playbook of brinkmanship to extract concessions from Washington and neighbors as he grapples with a decaying economy crippled by the pandemic, mismanagement and US-led sanctions over his nuclear ambitions.

The UN Security Council has scheduled a closed-door meeting for Thursday to discuss North Korea and non-proliferation matters. 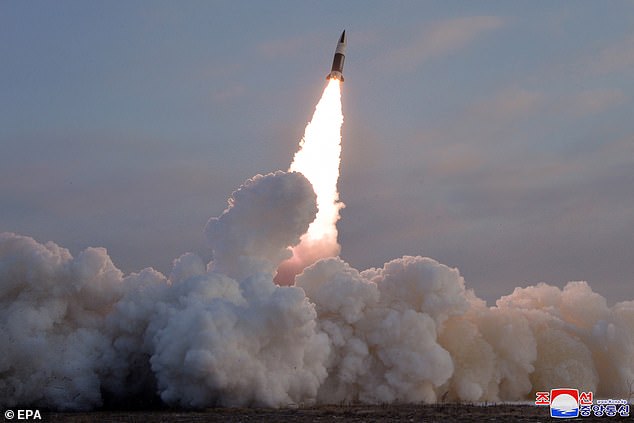 On Monday, North Korea carried out a test of a tactical guided missile as it ramps up its militarisation

Boo Seung-Chan, spokesman of South Korea’s Defense Ministry, said it was closely monitoring North Korea’s military activities but didn’t make presumptions about what the North’s next steps would be.

The potential resumption of tests of nuclear weapons and long-range ballistic missiles capable of hitting the US come at a delicate time in the region, with Kim’s sole major ally China set to host the Winter Olympics next month and South Korea gearing up for a presidential election in March.

North Korea bided its time during US President Joe Biden’s first year in office, but with no offer for top-level talks, they’ve moved on, said Hong Min of the Korea Institute for National Unification in Seoul.

‘With the North’s announcement, it seems inevitable they’ll conduct ICBM launches down the road,’ he said.

Ankit Panda of the Carnegie Endowment for International Peace agreed that while nuclear testing was unlikely, ‘long-range missile testing is back on the table.’ 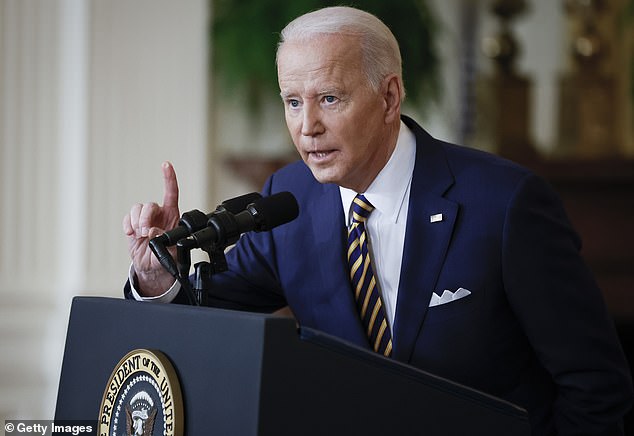 Kim Jong Un is ‘reiterating a message he’d delivered back in late-2019: that US actions give him no reason to adhere to his self-imposed moratorium.’

Kim had put new long-range missile launches on his military modernisation agenda last January but had always tied a return to such tests to US actions, Panda said.

‘The latest round of sanctions, unfortunately, appear to have precipitated this step,’ he added.

The wording of the latest KCNA missive, however, indicates that ‘Pyongyang may be leaving some space for flexibility, depending on how the Biden administration responds,’ said Rachel Minyoung Lee of the Stimson Center.

Earlier this week the United States called on the country to ‘cease its unlawful and destabilizing activities’ after it said it would seek new UN sanctions on North Korea.

But China’s special representative on Korean peninsula affairs poured cold water on the idea of a security council meeting to discuss fresh curbs on the North’s already-struggling economy.

‘The #SecurityCouncil has no plan to discuss the so-called draft resolution concerning sanctions on the #DPRK,’ Liu Xiaoming wrote on Twitter.

Even as it flexes its military muscles, North Korea, reeling economically from a self-imposed coronavirus blockade, has quietly restarted cross-border trade with China.

A freight train from North Korea arrived at the Chinese border city of Dandong for the first time since early 2020 last weekend.

Duyeon Kim, an analyst at Washington’s Center for a New American Security, said North Korea’s claim of US hostility is a pretext for continuing testing.

‘Pyongyang is squarely focused on meeting its nuclear weapons milestones because of its military imperative to do so. This means more tests to come,’ she said.

‘The pandemic has bought Pyongyang ample time to continue developing nuclear weapons because North Korea closed its borders and has been refusing direct talks, afraid of importing the virus.’

Kim Jong Un in recent years had showcased some new weapons he may wish to test, including what appeared to be North Korea’s largest-ever ICBM that was rolled out during a military parade in October 2020.

If the North does stage another nuclear test, it may use that event to claim it acquired an ability to build a nuclear warhead small enough to fit on a purported hypersonic missile it tested twice so far this year, experts say.

Last week, the US Treasury Department imposed sanctions on five North Koreans over their roles in obtaining equipment and technology for the North’s missile programs, in its response to North Korea’s earlier tests this month.

The State Department ordered sanctions against another North Korean, a Russian man and a Russian company for their broader support of North Korea’s weapons of mass destruction activities.

The Biden administration also said it would pursue additional UN sanctions over the North’s continued tests.