Orthodox Christians across Europe have been bracing themselves today to take part in the annual Epiphany celebrations – which has seen them plunging into freezing cold water.

Despite air temperatures being known to fall as low as -17C (1.4F) in some areas of eastern Europe at this time of year, many people still took part in the annual religious celebration.

Some people took the plunge into the icy waters on their own, while others took part in the celebration in groups.

In some areas authorities cut holes into frozen bodies of water and constructed wooden steps to allow easy access to the chilly waters for people seeking to take part. 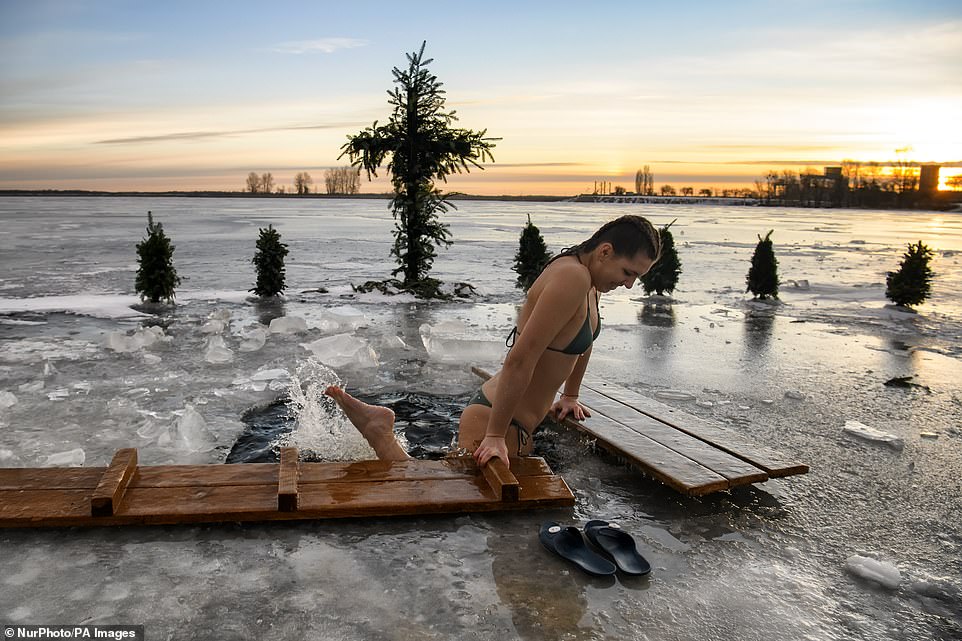 Orthodox Christians have been braving freezing temperatures today to take traditional plunges into icy waters as part of the annual Epiphany celebrations. Pictured: A woman in a bikini bathes in the water in a hole cut through the ice in the Kyiv sea in Vyshgorod, Ukraine 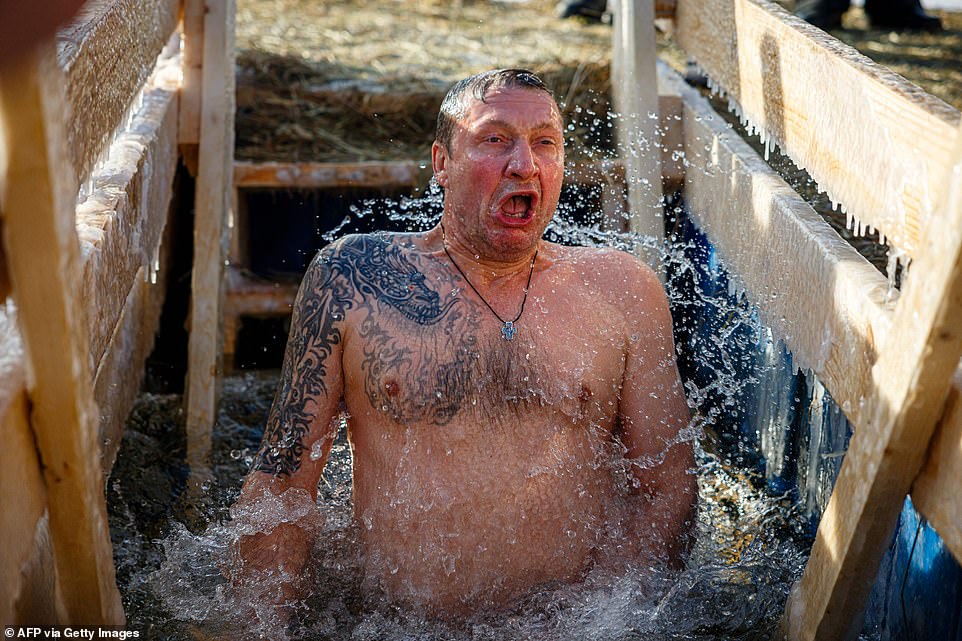 With water cascading around him, this Orthodox Christian bursts through the surface of the water in a pond in Moscow, Russia, earlier today 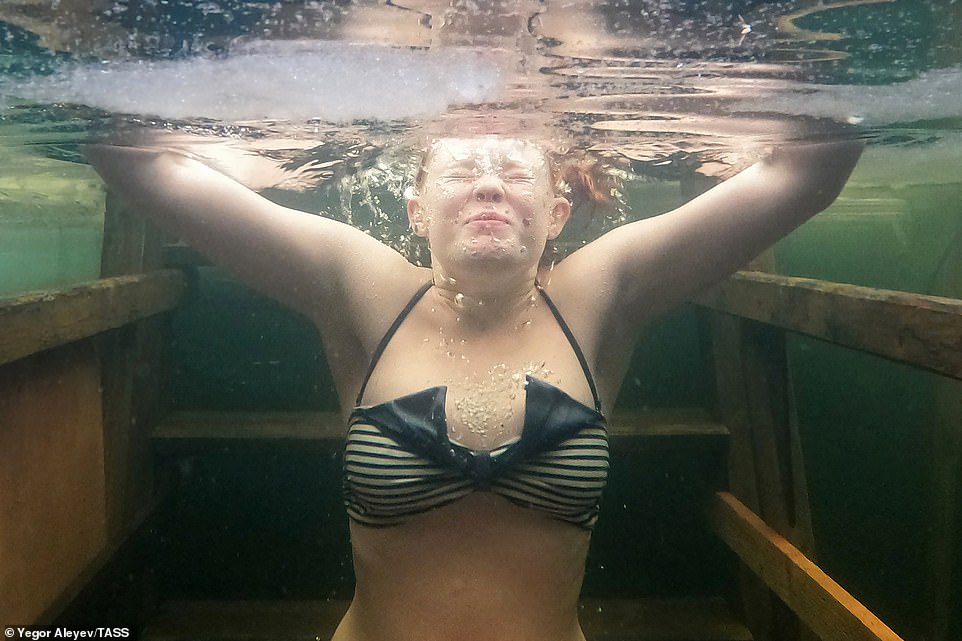 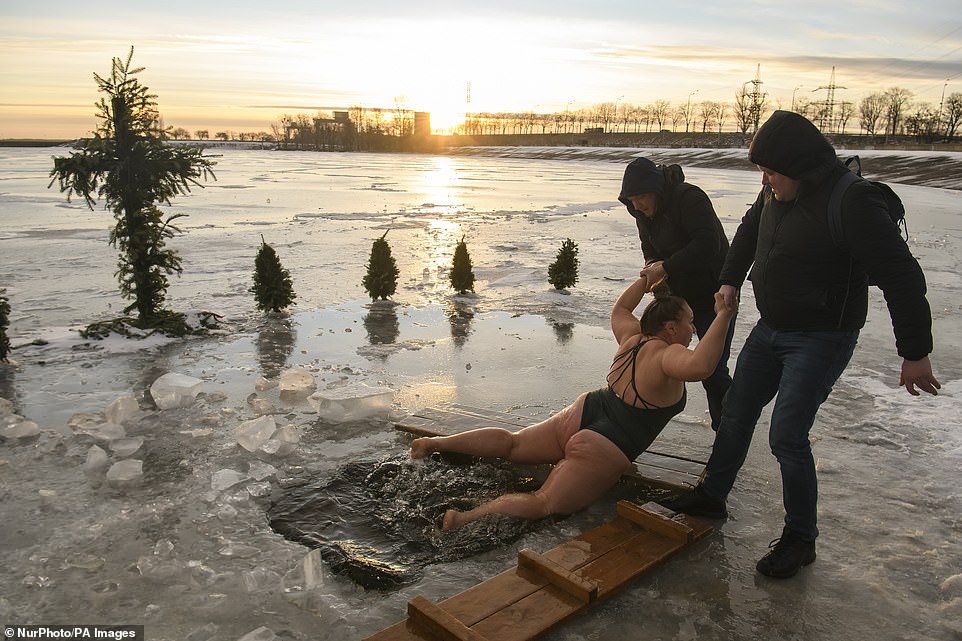 A woman is dragged from an ice hole in the Kyiv sea in Vyshgorod near Kyiv, Ukraine, earlier today after having plunged beneath the water’s surface 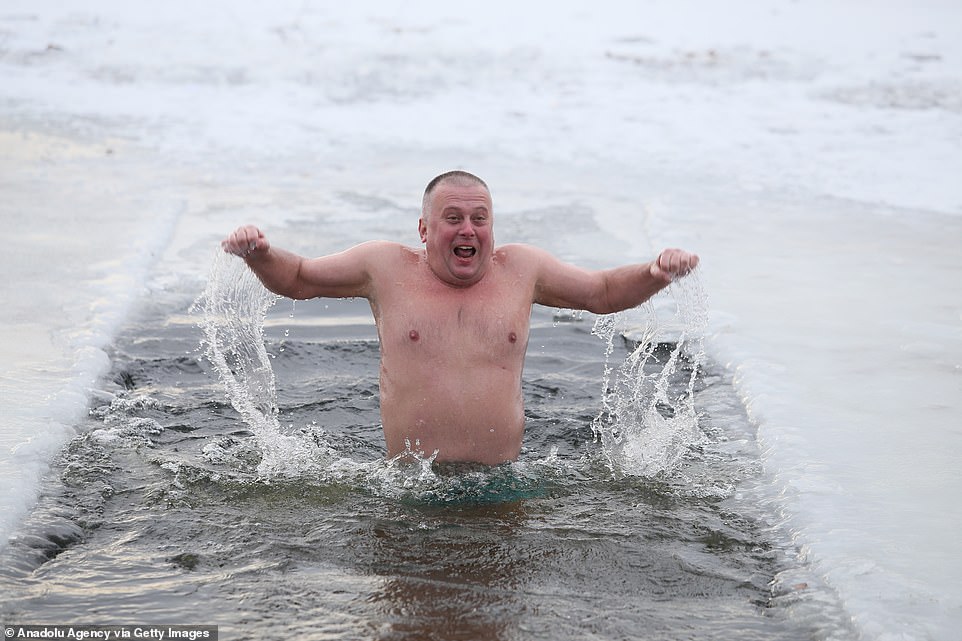 A Ukrainian Orthodox Christian lets out a gasp as he makes his way through the freezing waters of the Dnipro river in Kyiv, Ukraine 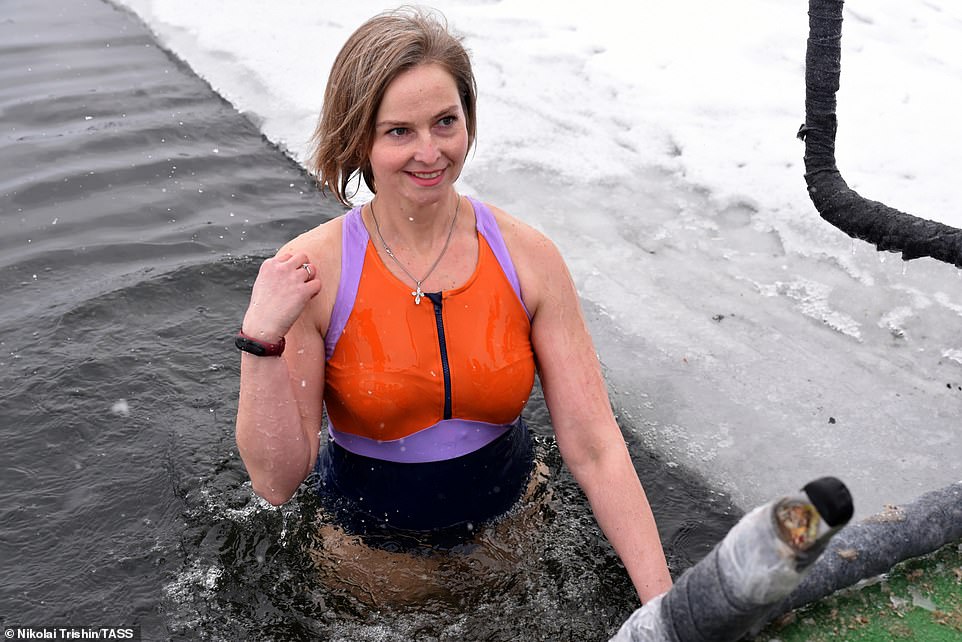 A woman is seen entering the freezing waters in Shcherbakov Park in Donetsk, Ukraine, earlier today to celebrate the Epiphany

While in Ukraine, soldiers were seen taking turns dipping into a frozen pond – in which a cross shape had been cut out to allow the celebration to go ahead.

And in Serbia, a whole group of Orthodox Christians swam in the Danube River to mark the Epiphany.

The tradition in recent years has been embraced by politicians and diplomats, with President Vladimir Putin known to have taken part in previous years.

And this year was no different, as the Russian president defied rumours about the state of his health by taking a dip in icy waters near Moscow. 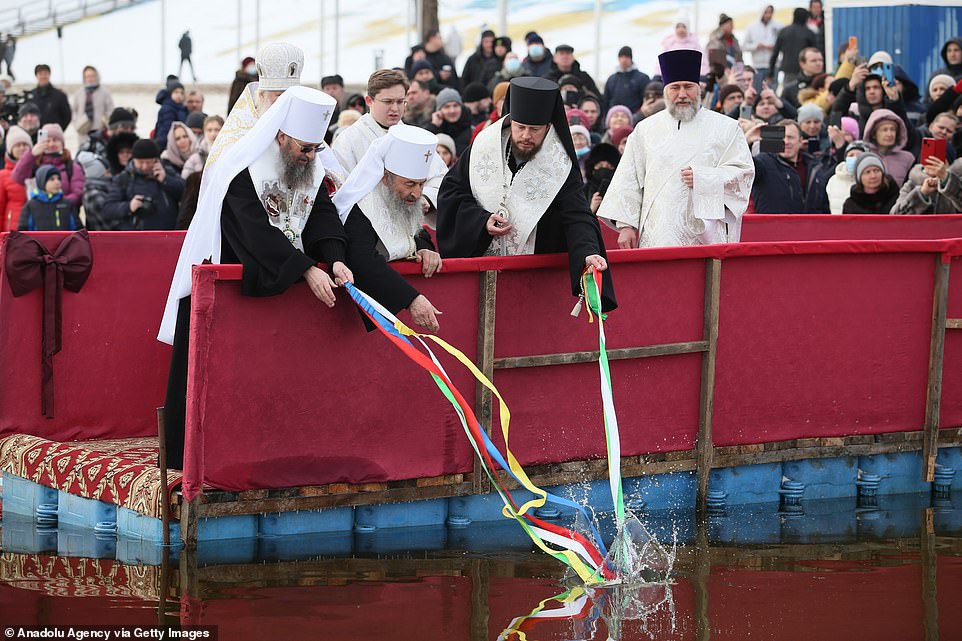 The head of the Ukrainian Orthodox Church of the Moscow Patriarchate, Metropolitan of Kiev and All Ukraine Onufry (centre) is seen blessing a body of water in Kiev, Ukraine earlier today ahead of the annual Epiphany celebrations 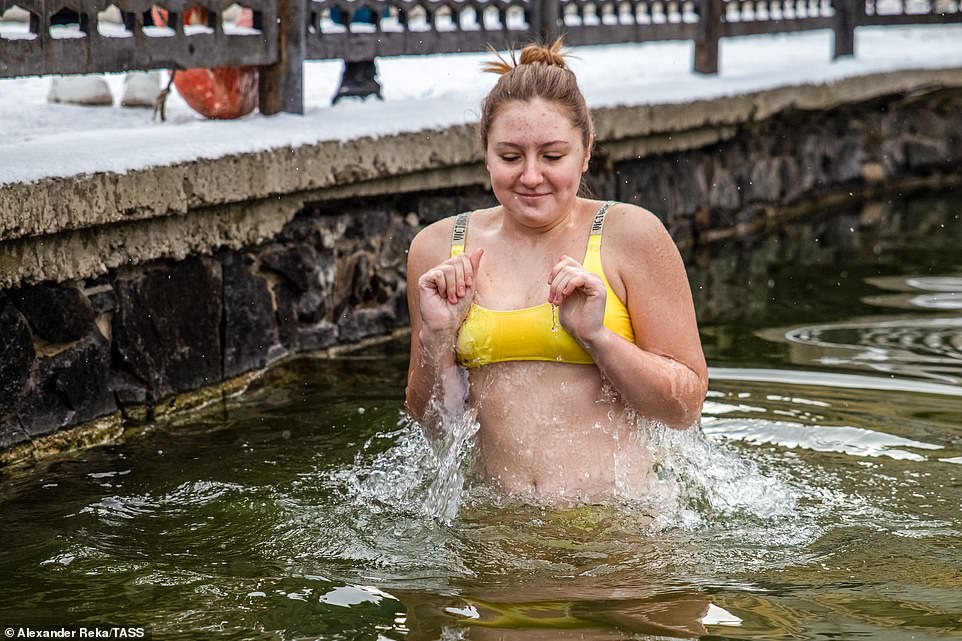 A woman in a yellow bikini braces herself as she takes a plunge into chilly waters at Ste George Church in Alchevsk, in the Lugansk region of Ukraine, earlier today 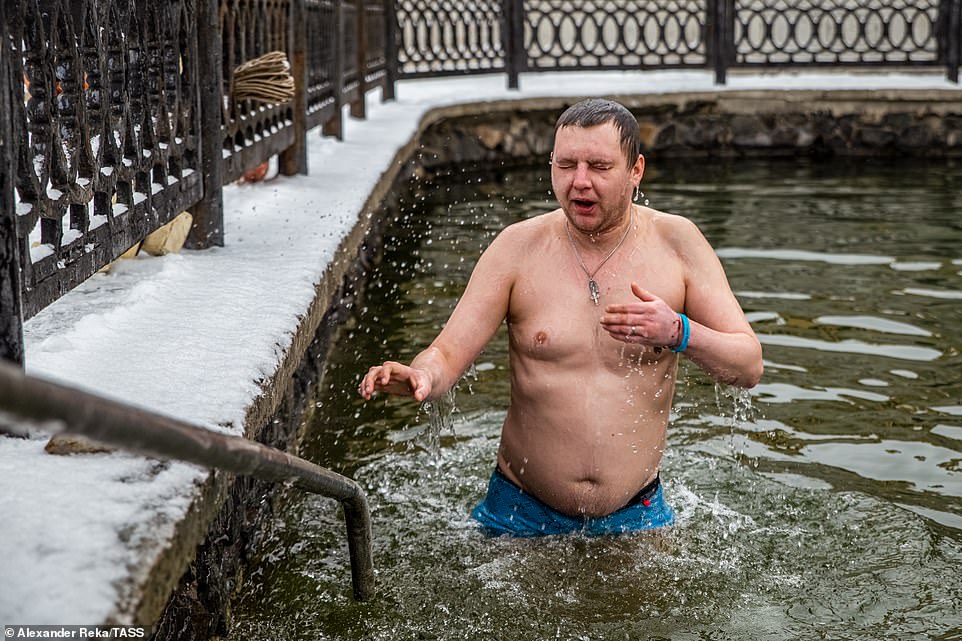 A man is seen closing his eyes as water pours over his face and shoulders after emerging from the icy waters in Alchevsk, Ukraine earlier today 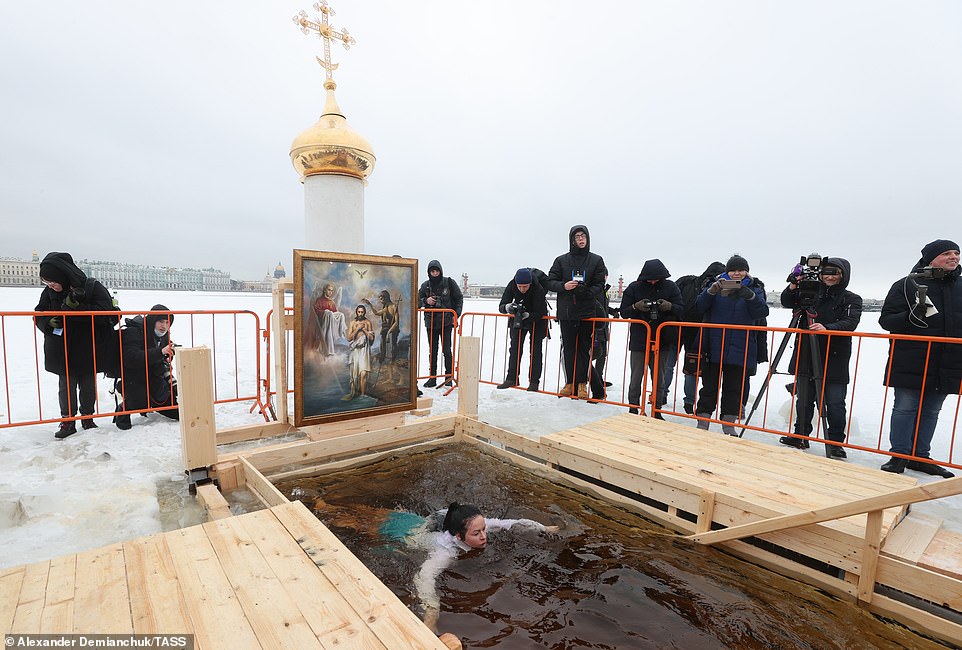 A woman is seen taking a dip in an ice hole near St Petersburg, Russia, earlier today as a crowd of people watch from orange behind barriers 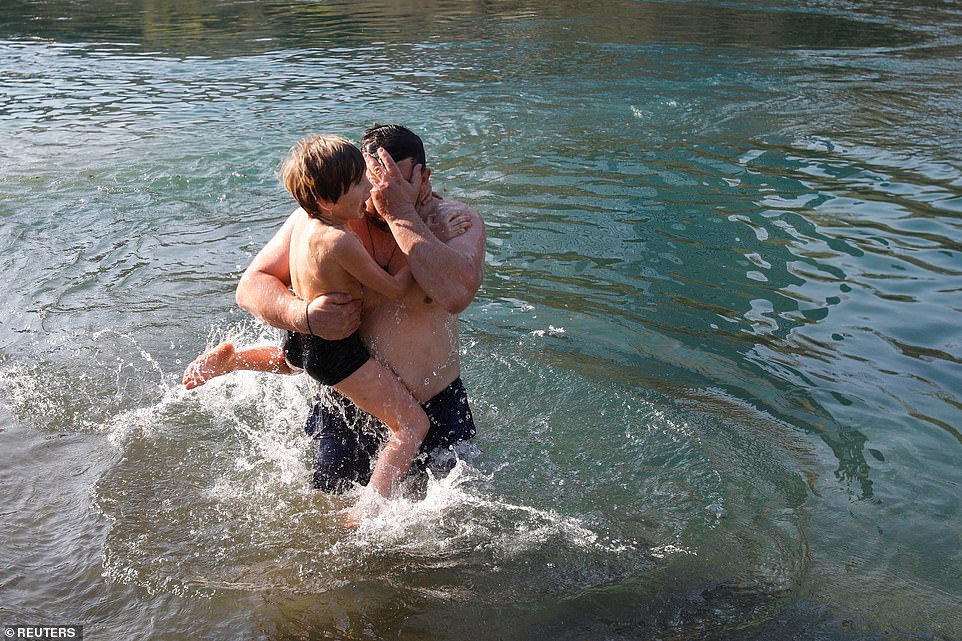 A boy is seen gasping for air while he clutches onto a man as the pair emerge from the waters of the Moraca River in Podgorica, Montenegro earlier today 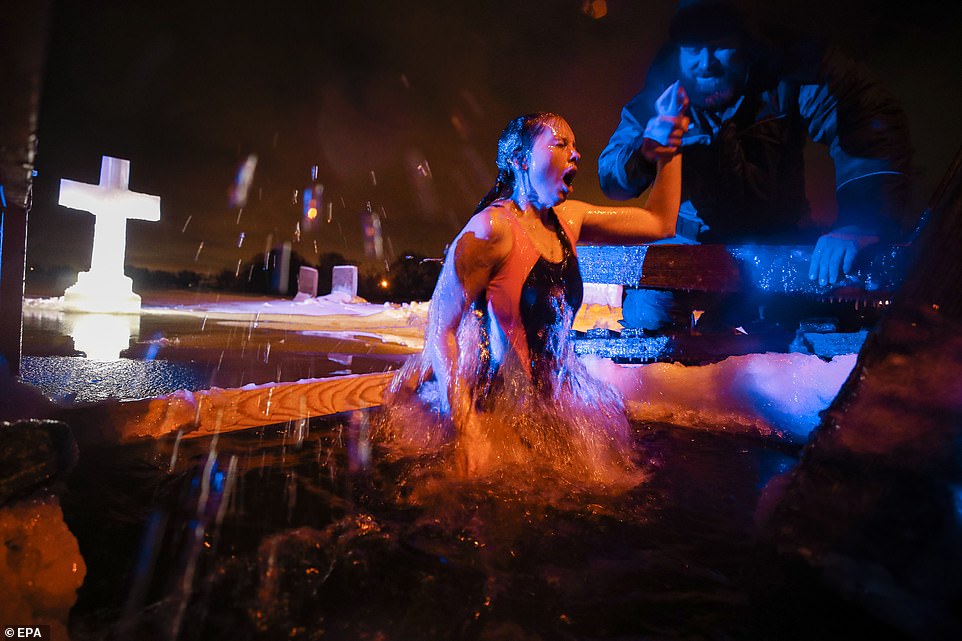 During the early hours of this morning, a woman can be seen receiving a helping hand out of the freezing waters in Domodedovo, Moscow region, Russia

The 68-year-old looked fit and healthy in tight blue swimming trunks as he dunked in a pool, repeatedly crossing himself, in footage released yesterday.

Video showed Putin getting into a cross-shaped pool to carry out the rite opposite an imposing cross made from ice.

‘This is a tradition. He doesn’t betray traditions,’ spokesman Dmitry Peskov said, referring to the centuries-old practice among Russian Orthodox Christians of cutting holes to immerse themselves in icy lakes and rivers on the day Jesus Christ was baptised in the River Jordan.

In Eastern Christianity, the feast of Epiphany commemorates the Baptism of Jesus. 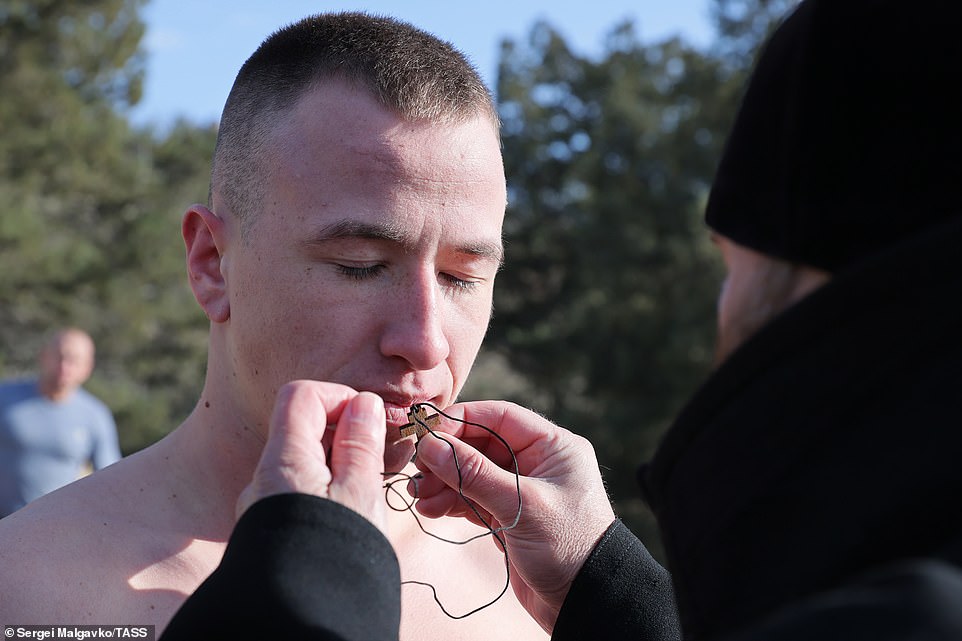 A man kisses a small wooden cross at St George Spring at the foot of Mount Ai-Georgy in Sudak, Crimea, earlier this morning A Russian Orthodox Christian flicks his hair back and forth as he emerges from the freezing water in Kronstadt Naval Base outside St Petersburg, Russia today 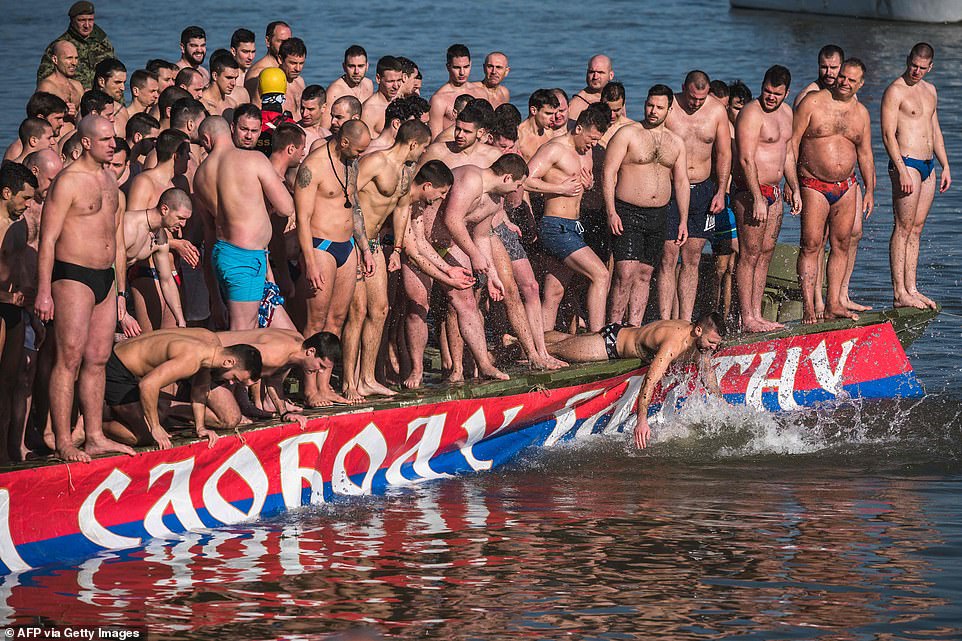 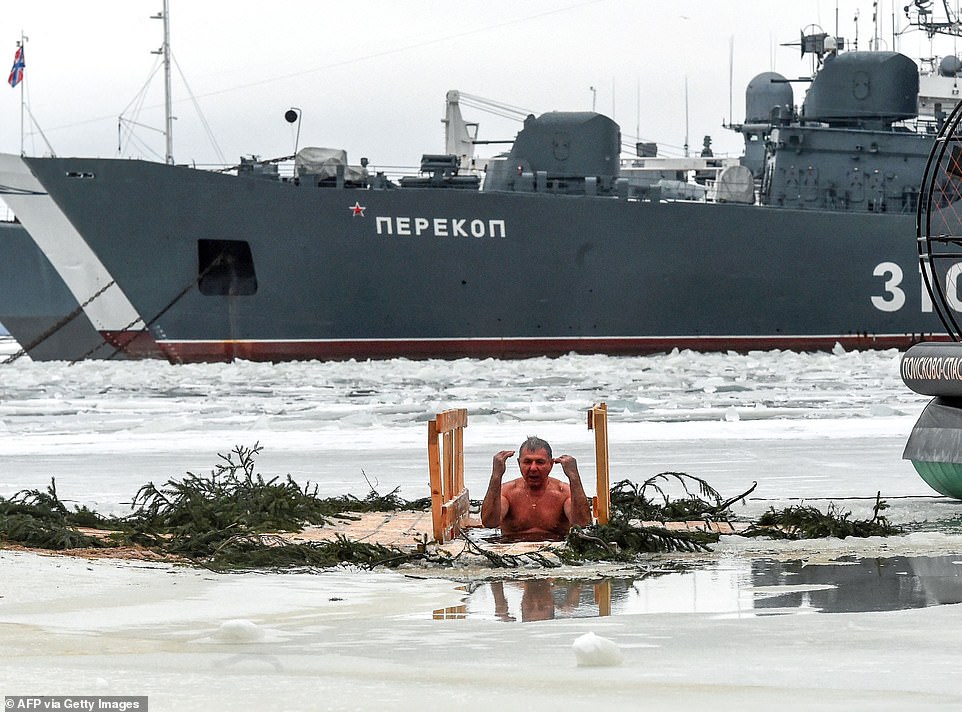 With a Russian naval ship looming in the background, this Orthodox Christian slicks back his hair with his hands after having submerged beneath the chilly waters 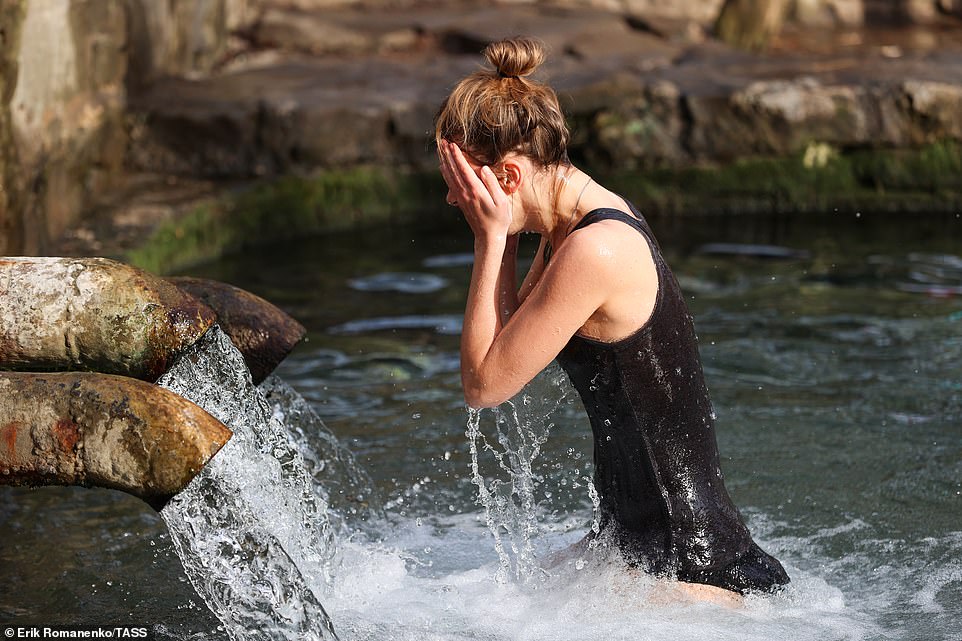 With a large crowd of onlookers, a man emerges from an ice hole in a frozen reservoir in Karlivka, Ukraine, earlier today 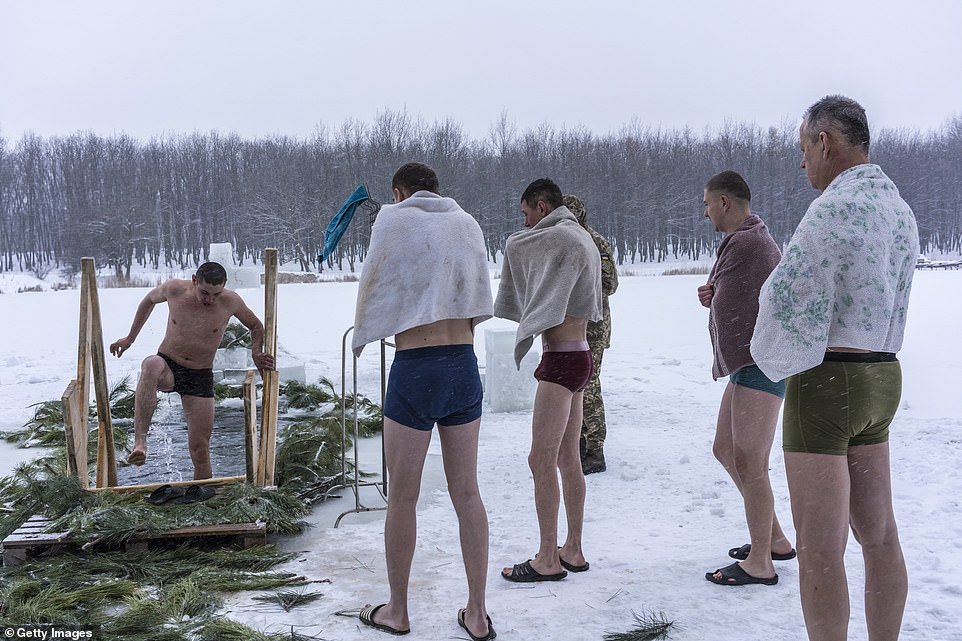 The religious holiday of Epiphany is also celebrated in some Western Christian churches as Three Kings Day, which marks the visit of the Magi, or three wise men, to the baby Jesus and closes out the Christmas season.

The Russian Orthodox Church celebrates the holiday according to the Julian calendar.

Although some countries celebrate Epiphany on January 6, in the tradition of the Orthodox Church it is marked each year on January 19 – the day that Jesus was said to have been baptised into the faith.

Orthodox Christians take dips in water outside to mark the occasion and celebrate the baptism.

In order for custom to take place in Russia and elsewhere in Eastern Europe where the ground is frozen, holes need to be cut in the ice in advance. 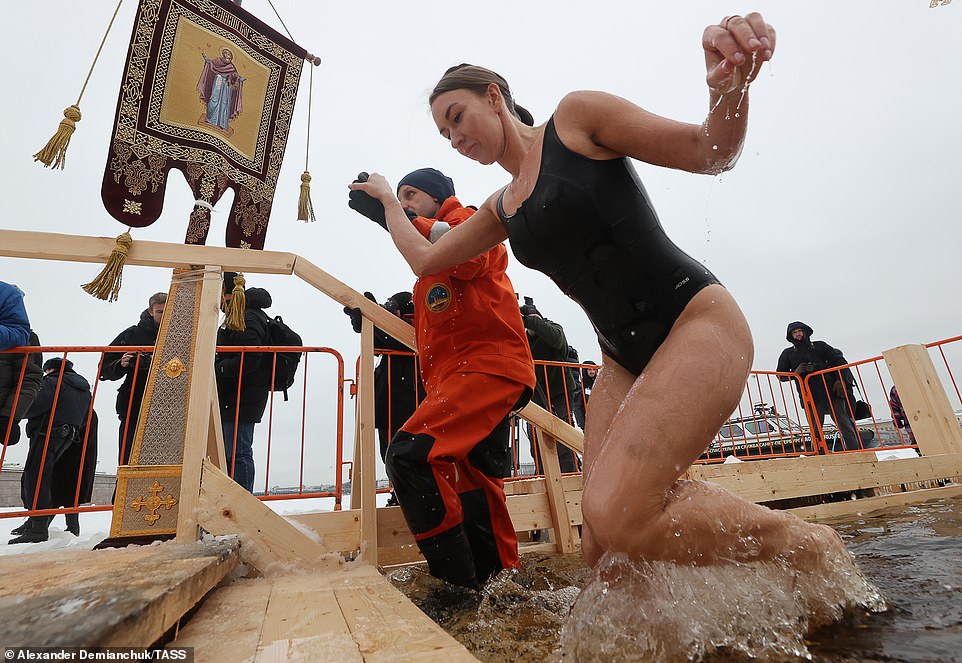 Receiving a helping hand from a thermal-wearing supervisor, this women emerges from an ice hole near the Peter and Paul Fortress in St Petersburg, Russia, earlier today 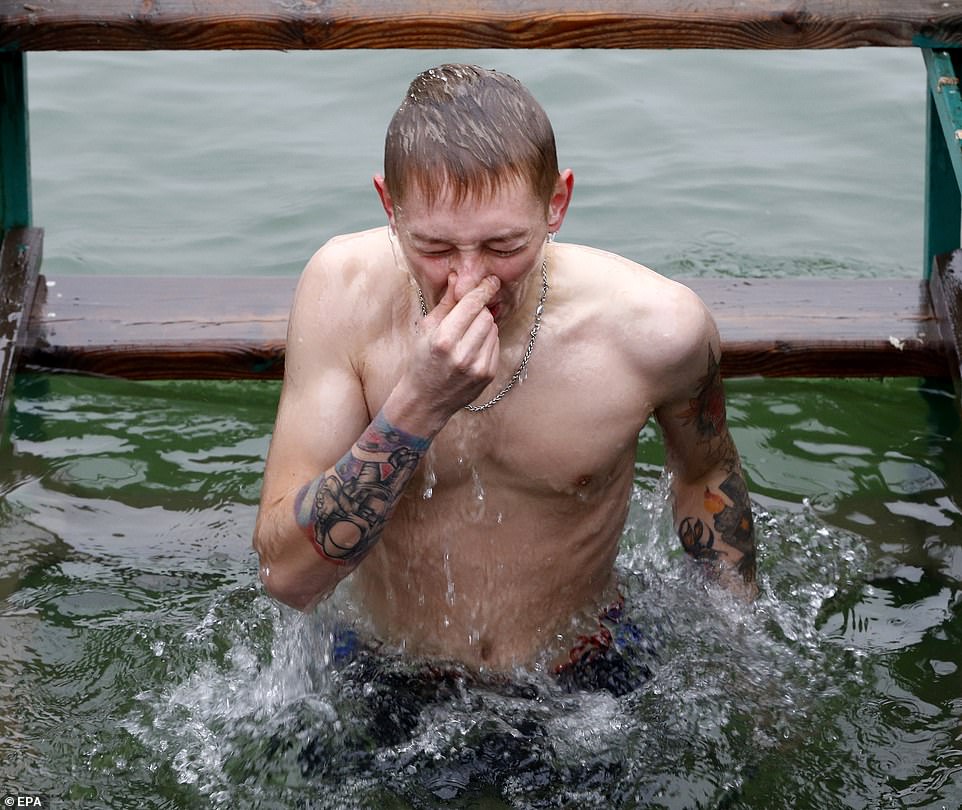 Holding his nose, this man takes the plunge beneath the icy waves in a frozen lake near the village of Pokrovka in Kyrgyzstan earlier today 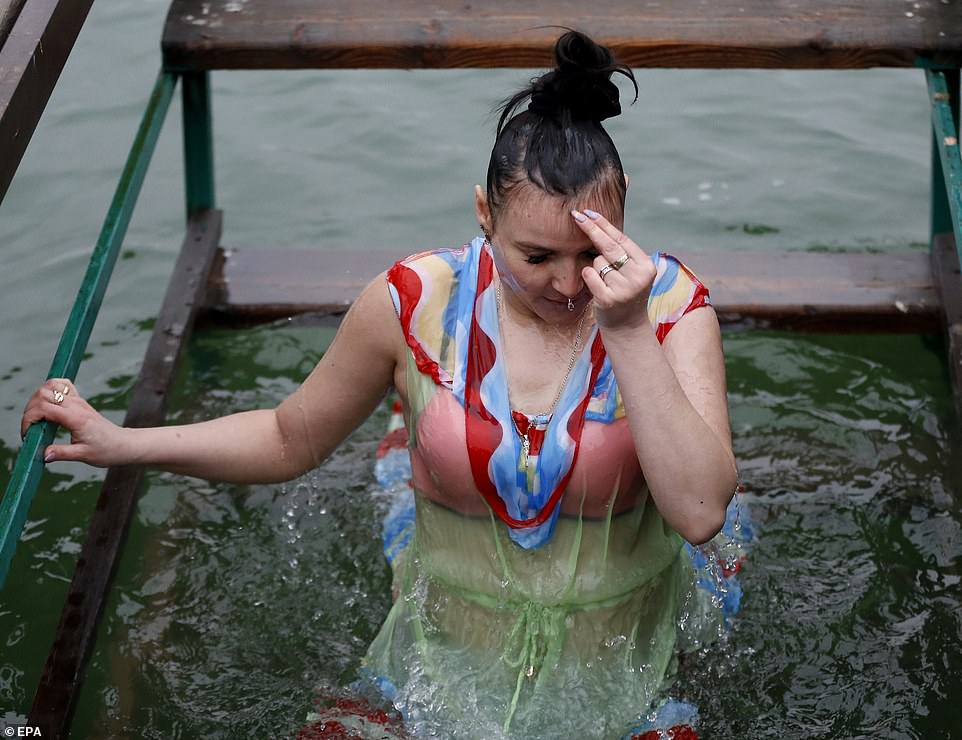 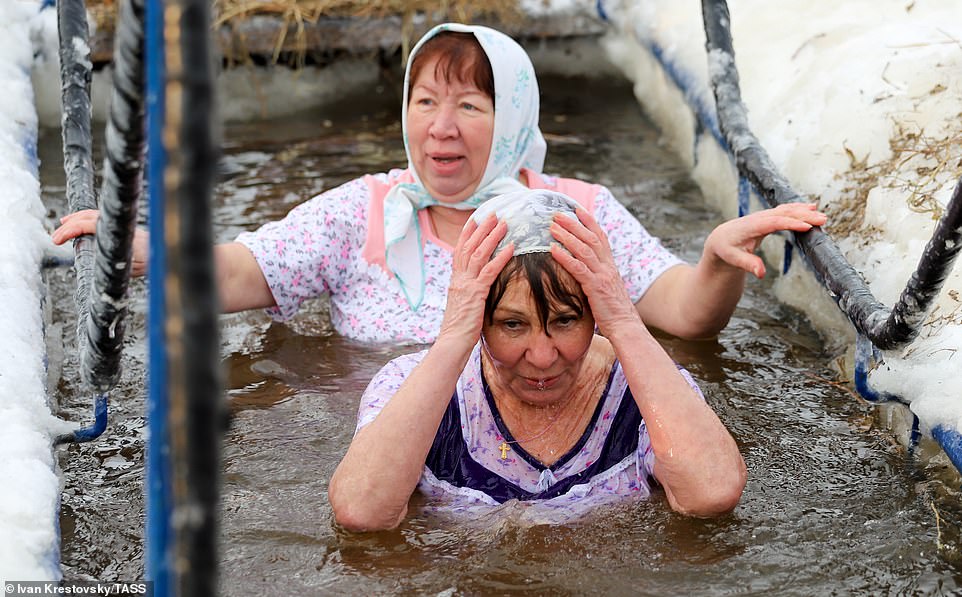 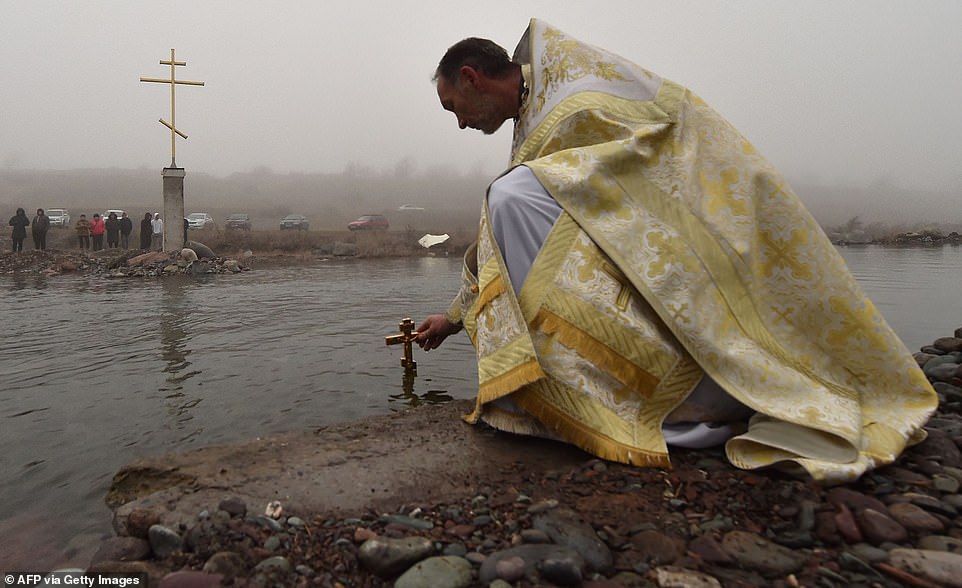 An Orthodox priest holds a golden cross down into the water of the Kara-Balta river near the village of Sosnovka, Russia