By Ross Ibbetson For Mailonline

French police have arrested two suspected ISIS militants who were plotting a stabbing spree over the Christmas holiday period, according to local media.

The 23-year-old men were detained at separate addresses in the greater Paris area last Monday, according to news channel BFM TV.

One of the suspects told officers he wanted to slaughter ‘disbelievers’ and that he hoped to be shot dead so that he could be ‘martyred’, Le Figaro reported. He also pledged allegiance to ISIS. 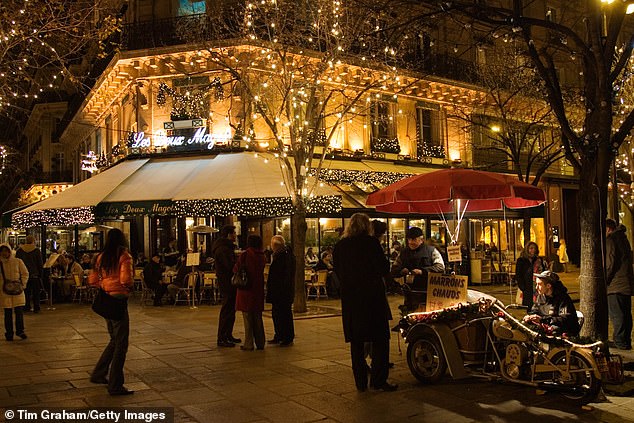 Roasted chestnut street seller outside Les Deux Magots Cafe and Restaurant, Boulevard St Germain, Paris, in a file photo from last January. They arrested suspects are alleged to have been plotting knife attacks around Christmas and targeting crowded areas including shopping malls, universities and busy streets.

ISIS propaganda was seized by cops at both their homes in Meaux, Seine-et-Marne, and Pecq, Yvelines, BFM TV said.

The pair were indicted on Friday and have been remanded in custody.

It is the fourth such plot foiled by police since the start of this year.

It comes as it was revealed that the government in the Alpes-Maritimes region has decided to bolster security around the Christmas market in Nice.

Nice was the scene of an horrific ISIS attack when a 19-tonne lorry was driven at crowds, killing 86 people during Bastille Day celebrations on July 14, 2016.

It was one of the worst of the terror attacks which have plagued France in recent years.

The worst among them, the bombings and shootings in November 2015 at the Bataclan theatre and other sites around Paris that killed 130 people.

Last October, a French schoolteacher was beheaded in Conflans, a commuter suburb near Paris, by a Chechen teenager who was then shot dead by police.

And in 2021, there have been at least three terrorist attacks, including on a policewoman who was stabbed to death in the city of Nantes on May 28.

The killer was later shot dead by police. He was a known Islamist who had been radicalised in prison.