A comedian wrongly accused of appearing in a government vaccination ad has debunked claims by anti-vaxxers that the hospitalised patients are paid actors.

Mitch Garling shared a screenshot of the conspiracy theory with his fans on Friday, saying: ‘People keep sending me this. Apparently I’m an actor pretending to have Covid.’

The clip features construction worker Fawaz Dandan, 50, pharmacy worker Ramona El-Nachar, 30, and tradie Osama Ahmad, 35, explaining how the illness has floored them and pleading with Australians to get vaccinated. 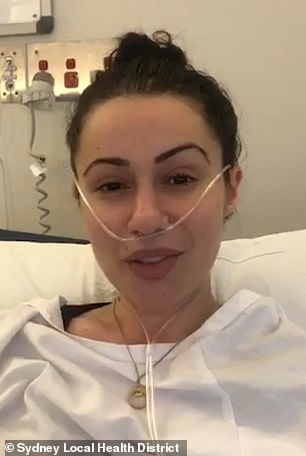 Ramona El-Nachar (left) is a pharmacy worker featured in the NSW Health video. Some anti-vaxxers have falsely claimed she is really actress Ramona Rose Khoury (right)

A TikTok account pushing conspiracy theories on Thursday falsely claimed to have exposed the vaccine video as a lie.

The TikTok user claimed Ms El-Nachar was actually an actress named Ramona Rose Khoury and called Concord Hospital asking to speak to Ms Khoury, only to be told there was no-one there by that name.

He used this as ‘evidence’ the ad was fake, when in fact it proved nothing as he asked for the actor he baselessly claimed was in the video rather than the real patient in hospital.

‘I started getting a bunch of messages calling me a sell out and a piece of sh*t which doesn’t happen that often so I looked into it,’ Mr Garling said in a post to Instagram. 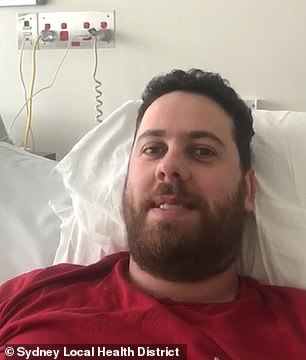 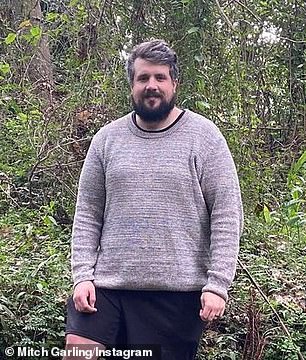 ‘I found out people are using my StarNow profile and saying that I am an actor sitting in a hospital pretending to have Covid,’ he said.

‘Look I am an actor… but I’ve never pretended to have Covid – he doesn’t even look like me, he has a beard that’s it. It doesn’t make any sense.’

Speaking to Daily Mail Australia Mr Garling said he was shocked at the claims he was in the video has not been anywhere near a hospital recenlty.

‘My hair alone proves that’s not me, it’s grown very long working from home and that guy’s hair is short. You can see that in posts I’ve put up this week. It would be impressive if my hair grew that long in a matter of days.’

‘I think people pushing these conspiracy theories are just grabbing onto anything they can to cause drama.’

The video from the Sydney Local Health District of NSW Health was released on Wednesday as more than 100 NSW residents fight for their lives in hospitals across the state, with 117 being treated in overwhelmed Covid intensive care units by Friday.

The ad sparked a flood of desperate posts from conspiracy theorists and anti-vaxxers.

‘Paid actors u should be ashamed of yourselfs (sic),’ one person wrote to Facebook.

‘Seriously, can not believe you think we are that bloody stupid! All three are paid actors, and yes there is evidence to show this if needed,’ another person said who did not provide any evidence.

‘Paid actors it’s been proven what a joke! Stop believing the government and the news, all the people fearing it please open your eyes,’ added a third.

‘How is it that these people can’t have visitors but a reporter has unlimited access to these patients?’ a fourth said.

In the ad, Mr Fawaz is filmed lying face-down barely able to speak in his hospital bed.

‘Today I am really bad: my fever, my headache, my breathing,’ he said.

The dad, from Putney in Sydney’s north, still has no idea how he contracted the virus which has now spread to his entire immediate family – including his six children.

At the time the video was shot, one of his daughters had also been rushed to hospital because her condition was rapidly deteriorating.

‘She’s getting dizzy, her heart rate is too high and she is finding it hard to breathe,’ he said.

‘So please get vaccinated. I wish I knew beforehand… It’s not a game, it’s for real.’

Mr Fawaz had been booked in to get the Pfizer jab for October, before being struck down before the appointment.

Ms El-Nachar who needs the assistance of breathing tubes, had received her first dose of the vaccine but is thought to have contracted the crippling respiratory virus while working at a pharmacy in Greenacre, in Sydney’s southwest.

She said the community needs to ‘wake and realise this is real’.

‘You end up in hospital and you can’t breathe,’ she said fighting back tears.

‘All I can think about is my children. I haven’t seen them in a very long time.

‘I’m an essential worker. I could have contracted the virus from someone who didn’t want to get the vaccination.’

Ms El-Nachar added that the mental anguish is equally as debilitating as the physical aspects of the gruelling disease.

‘I’ve had two kids and a major operation but I’ve never had to push myself to recover mentally this much,’ she said.

‘Many of them had stories of misinformation that they had received prior to falling ill.

‘So if ever there was a reason for you to think about getting vaccinated today, I’d urge you to listen.’ 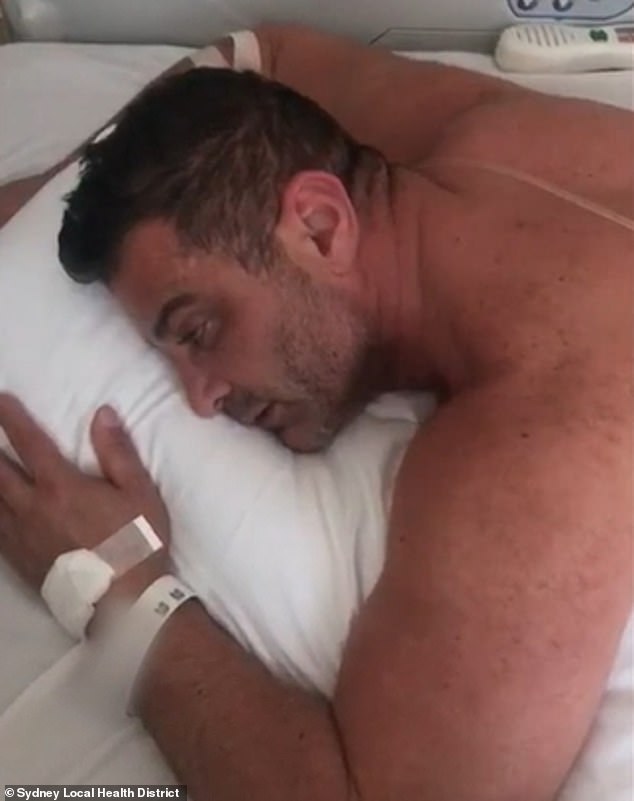 Mr Fawaz is filmed lying face-down barely able to speak in his hospital bed. ‘Today I am really bad: my fever, my headache, my breathing,’ he said

Ms El-Nachar added that the mental anguish is equally as debilitating as the physical aspects of the gruelling disease.

‘I’ve had two kids and a major operation but I’ve never had to push myself to recover mentally this much,’ she said.

‘Many of them had stories of misinformation that they had received prior to falling ill.

‘So if ever there was a reason for you to think about getting vaccinated today, I’d urge you to listen.’ 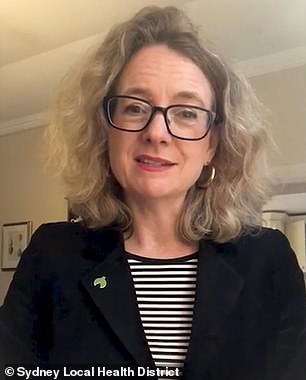 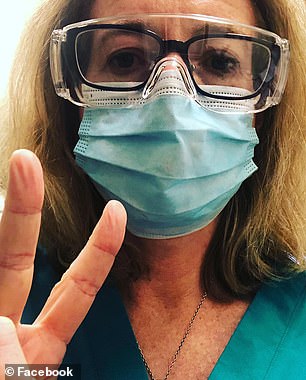 Osama, 35, said he was ‘close to death’ when he first arrived on the ward a week ago.

‘I had shortness of breath and it felt like there was something attacking my lungs. It was harsh,’ the tradesman from Lakemba in Sydney’s southwest said.

‘It was fever, headaches and a combination of things you do not want to experience.’

His young kids are also being treated for Covid at Westmead Children’s Hospital and his wife is clinging to life in the intensive care unit of a separate health facility.

‘It’s separated us, it hasn’t been easy,’ Osama said.

He is now urging all Australians to get vaccinated.

The video was filmed by Dr Morgan who works treating the patients in Concord Hospital. 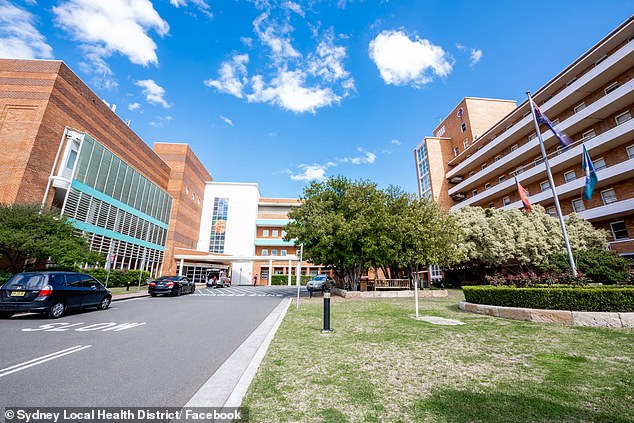 COVID-19: WHAT YOU NEED TO KNOW

Coronaviruses are a large family of viruses that cause respiratory infections. These can range from the common cold to more serious diseases.

Covid-19 is a disease caused by a form of coronavirus.

What are the symptoms?

Symptoms of Covid-19 can range from mild illness to pneumonia.

Some people will recover easily, and others may get very sick very quickly.

People with coronavirus may experience symptoms such as:

To stop the spread of Covid-19 people with even mild symptoms of respiratory infection should get tested.