Graduate students are drowning in debt up to $200K, yet earn as low as $30K two years later

Students pursuing graduate degrees at some of the nation’s most prestigious universities are being slammed with loan debt of up to $200,000, yet most only earn $30,000 two years after graduation.

A recent Wall Street journal article detailed the strife students faced in highly competitive programs that leave them financially crippled and wondering if the degree was worth being saddled by six-figure debt.

The Wall Street Journal cited Columbia University as one of the main perpetrators of charging inordinate tuition fees and offering little financial help or guidance in return. Recent film graduates had a median debt of $181,000 while making a median income of $30,000 just two years later.

Columbia University President Lee Bollinger asserted that the data wasn’t an accurate depiction of students’ success because it only looked at two years post-graduation. ‘Nevertheless, this is not what we want it to be,’ he said. 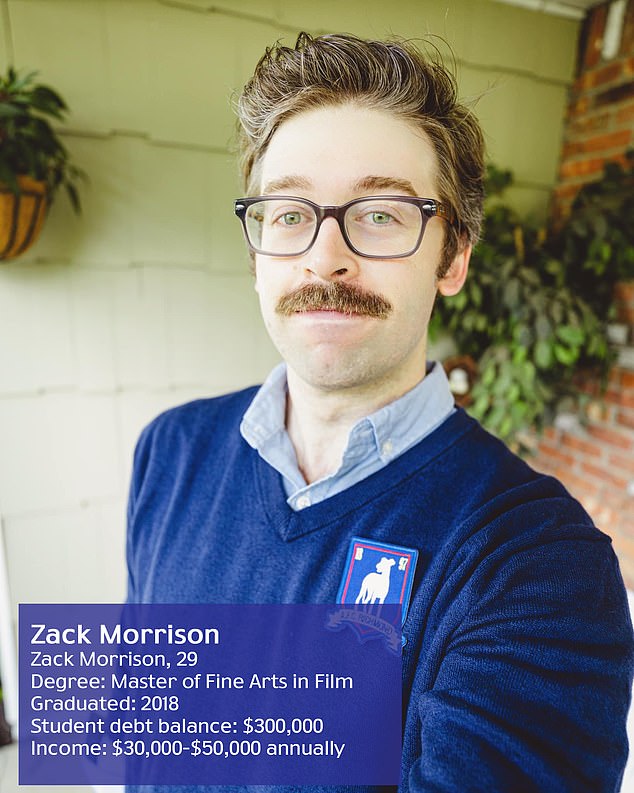 ‘There’s always those 2 a.m. panic attacks where you’re thinking, ‘How the hell am I ever going to pay this off?’ ‘ said 29-year-old Zack Morrison, of New Jersey, who graduated from Columbia in 2018 with a Master of Fine arts in film. He currently owes about $300,000, including accrued interest, and earns between $30,000 and $50,000 a year as a Hollywood assistant with independent film side gigs.

After the Wall Street Journal article was published, Morrison shared it on Facebook and wrote ‘I disagree with the notion that masters degrees ‘don’t pay off’ or the idea that the school doesn’t provide the necessary training or skills to succeed . . . These loans are the real deal though, but it was a decision I made for myself before starting the program. At the end of the day, I hope this article is read as a criticism of the insane costs of higher education and a gig economy that still pays its workers wages that were set in the 1980’s.’

He added, ‘Given the way we all relied on the arts during the last year+, I hope we as a society find a way to improve funding for, and financial support of, our artists.’

Another student, Patrick Clement, 41, was also in the film MFA program and graduated in 2020 with $360,000 in debt. ‘As a poor kid and a high-school dropout, there was an attraction to getting an Ivy League master’s degree,’ he said.

He did not disclose his annual income, but teaches at a community college on top of running an antique shop.

Grant Bromley, 28, took out $115,000 in federal loans while getting his Master of Arts in film and media studies at Columbia. His debt has since spiked to $156,000 and he said, ‘It’s a number so large that it doesn’t necessarily feel real.’

On graduating, he moved in with his parents in Knoxville, Tennessee, for a year while working at the same TJ Maxx he had a job at as a teenager. He still works at TJ Maxx, this time in Chattanooga, Tennessee, and earns about $16 an hour.

Bromley is also working on his third feature film in his spare time and thanked Columbia for allowing him the opportunity to succeed in his film, wrote the Wall Street Journal. 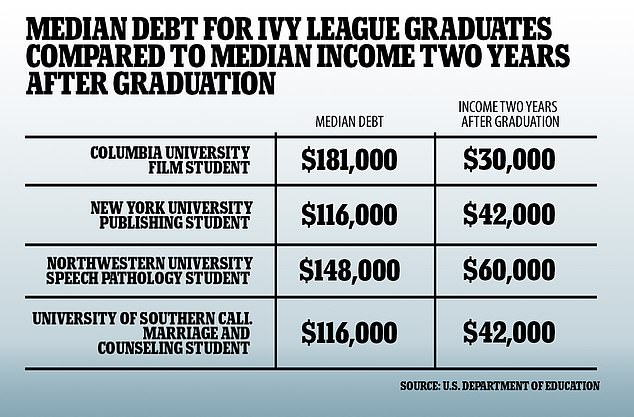 According to its article, which uses an analysis of data from the Department of Education, Columbia’s film students faced the most debt compared to any other Master’s program in the country despite the Manhattan university being the eighth wealthiest private school with a $11.3 billion endowment rate.

While student loan debt is a known issue affecting undergraduate students, what makes graduate loans even more insidious is that the federal Grad Plus loan program has no fixed limit on how much grad students can borrow for tuition, fees and living expenses.

The program, which has charged interest rates as high as 7.9percent in recent years, leads students at private universities like Columbia to take out loans unchecked.

The Wall Street journal found that at least 43percent of students who recently took out loans for master’s degrees at private universities had not paid down any of their original debt or were behind on payments roughly two years after graduation.

Meanwhile, universities, are given an economic incentive to expand graduate degree programs and face no consequences if students can’t afford to pay the federal loans once they leave.

‘They’re not really held accountable for the myth they’re selling to students. We should not be giving federal-aid dollars to these programs that systematically saddle students with high debt,’ Ozan Jaquette, an associate professor of higher education at the University of California told the Wall Street Journal.

Since fall 2011, Columbia has increased published rates for most master’s programs by a greater margin than it did for its undergraduates. And during the pandemic, it kept tuition flat for undergraduate students, but raised charges for nearly every master’s degree. 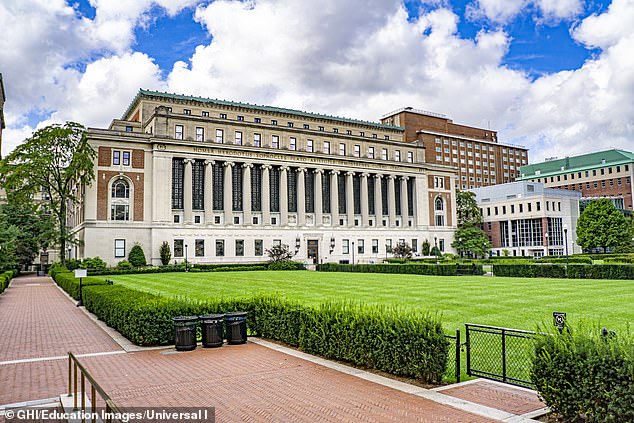 And in 2018, a group of almost 130 film students and alumni described their financial worries in a letter to faculty for review. Columbia told the Wall Street Journal that the results of such reviews were confidential

Students and staff alike have attempted multiple times to appeal to Columbia administration to secure more funding for scholarships and reduced tuition costs.

Christian Parker, a Columbia theater department faculty member and former department chair, said he and colleagues talked constantly about student debt. ‘I’ve never been to an all-school faculty meeting where it wasn’t brought up and where faculty were not advocating and agitating for this issue to remain at the front of the list of priorities for the dean’s leadership,’ he said.

In the past four years, Columbia School of the Arts said it has increased average scholarships by about a third or roughly $24,000. It also reduced the length of the MFA film program from a maximum of four years from five.

In April, Columbia announced it would be putting $1.4 billion toward financial aid, though Bollinger said administrators have yet to decide how much will go toward its master’s degree programs.

The School of Social Work also increased the number of full-tuition awards for new master’s students to 12 from two, though the fall 2020 entering class had around 560 students.

Other than that, students said that they saw little effort on administrator’s part to alleviate their financial burden, the Wall Street journal reported.

In 2018, more than 160 MFA film students petitioned Bollinger and School of the Arts Dean Carol Becker to take action to provide more financial support to students. They didn’t hear back from the president and Becker told them in meetings that her hands were tied.

And in 2018, a group of almost 130 film students and alumni described their financial worries in a letter to faculty for review. Columbia told the Wall Street Journal that the results of such reviews were confidential.

While Columbia is wealthy, it isn’t as wealthy as schools like Yale, limiting the funds available for scholarships, according to Bollinger and school administration. Columbia, which has an annual budget of $5billion, is also devoting resources toward a 17-acre campus expansion in upper Manhattan that broke ground in 2008.