By Henry Martin For Mailonline

Dominic Cummings has reiterated his view that Matt Hancock should be sacked as he reignited hostilities with the minister today.

Mathematician Timothy Gowers had tweeted that the Health Secretary was ‘still not getting that earlier => shorter’ when it comes to lockdowns, and Mr Cummings replied: ‘Exactly #SackHancock’.

Giving evidence to MPs on the Government’s handling of the coronavirus crisis today, Mr Hancock had goaded the Vote Leave maverick as he claimed the Government had ‘operated better’ since he left Whitehall.

Mr Cummings had accused him of lying and incompetence, claiming the Cabinet minister should have been fired on several occasions when he was grilled last month.

But Mr Hancock said it was ‘telling’ that Mr Cummings had not provided MPs on the health and science select committees with written evidence to back up his allegations.

The Health Secretary said he had ‘no idea’ why Mr Cummings holds such a withering view of him, and insisted he was aware at the time last year that Mr Cummings wanted him to be sacked, but that he had always enjoyed the ‘wholesome support’ of Boris Johnson. 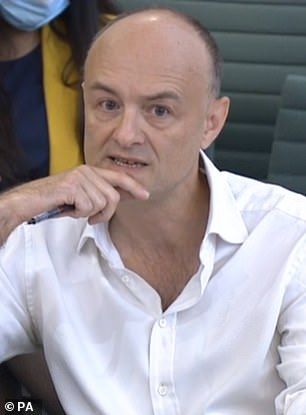 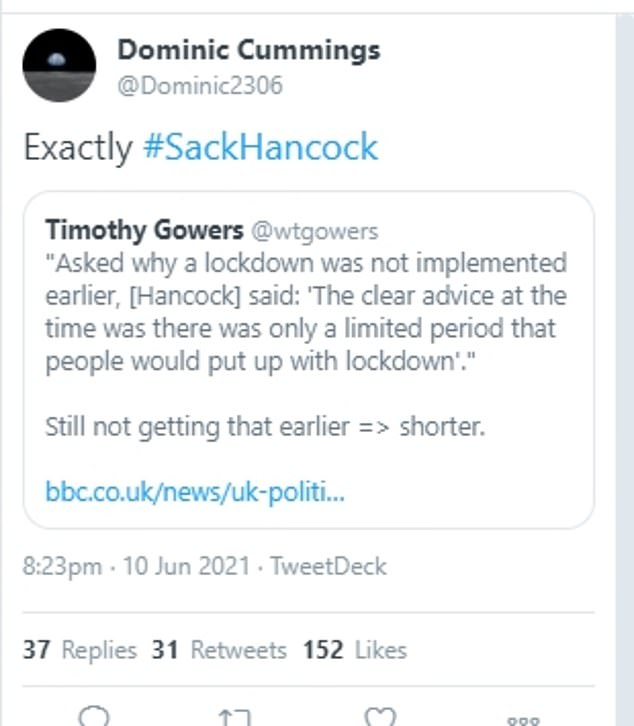 Mathematician Timothy Gowers had tweeted that the Health Secretary was ‘still not getting that earlier => shorter’ when it comes to lockdowns, and Mr Cummings replied: ‘Exactly #SackHancock’

Mr Cummings saved his fiercest criticism for Mr Hancock when he addressed the joint session of the committees at the end of May.

He attacked the Health Secretary over failings around the Government’s care homes policy, personal protective equipment (PPE) procurement and his public pledge on a coronavirus testing target.

Jeremy Hunt, the former health secretary and chairman of the Health Select Committee, said earlier this week that Mr Cummings was yet to submit written evidence to support the claims he made.

Mr Hancock said this morning he believed that was ‘telling’ and that he had acted with ‘honesty and integrity’ throughout the pandemic.

He said: ‘Well, it is telling that no evidence has been provided yet but there is a reason for that I think which is that throughout this I have got out of bed every morning with the view and the attitude that my job is to do everything I could to save lives and get this country out of the pandemic,’ he said.

‘I approached that with a mission-driven determination to make it happen. I tried to do that with an approach of honesty and integrity and critically answering questions both in public and in private to the best of my ability.’ 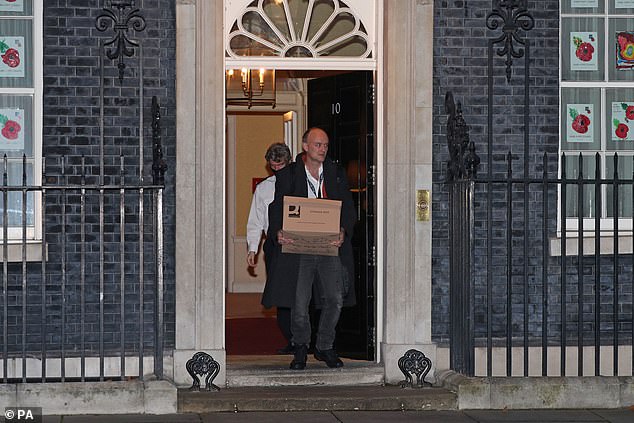 Asked what the origins were for his dispute with Mr Cummings, Mr Hancock replied: ‘I have no idea. I worked directly with the Prime Minister from the start of this and of course I worked with his aides and his team as well. I have no idea.’

The Health Secretary said he was aware that Mr Cummings wanted him to be fired, telling the committees: ‘Yes, because he briefed the newspapers at the time.

‘Or somebody briefed the newspapers, I now have a better idea who it was.’

Asked if he had raised objections to that, Mr Hancock said: ‘Yes, of course and I had the Prime Minister’s wholesome support all the way through.’