By Ieuan Ivett For Mailonline

Sociedad beat their Basque rivals Athletic Bilbao in Saturday’s final thanks to a 63rd minute penalty from forward Mikel Oyarzabal at the Estadio de La Cartuja.

And Imanol could not contain his excitement as he faced the media after he leading the club to their first trophy in 34 years. 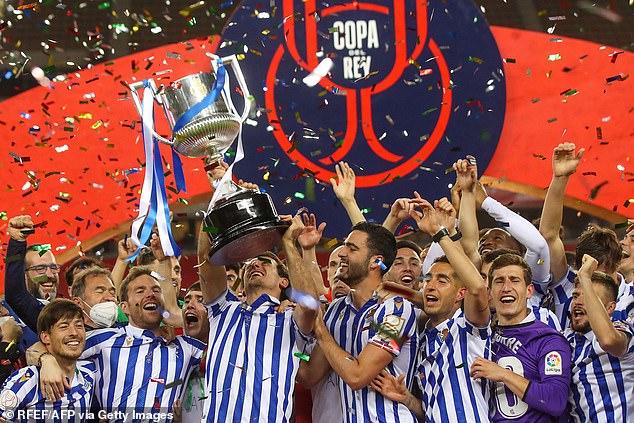 After switching his plain black t-shirt for a playing shirt, Imanol was also handed a scarf in the club’s colours and stood up in front of the microphones and raised the scarf above his head.

He then began to passionately chant: ‘This is for all of you, Guipúzcoa! For all those who feel the Real! Come on Real! Real! Come on, Goazen!’

After the chant, Imanol threw his hands around in celebration and began clapping in an incredible post-match press conference. 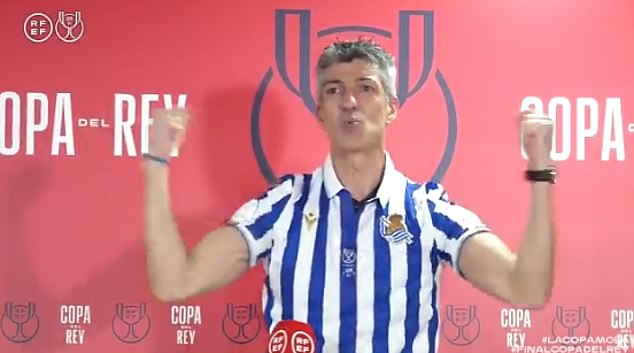 The Sociedad and Athletic Club fans had to wait one whole season for the final to take place, after both clubs refused to take the field last season due to having no fans in the stands.

They both opted to wait in the hope they could play the final in front of their own sets of fans but were told they had to conclude the 2019/20 Copa del Rey tournament before the 2020/21 final in two weeks.

Bilbao will have another shot at Copa del Rey glory on April 17 as they take on Barcelona in the 2020/21 final.